White Pine Infestation #798429 - Ask Extension
Over the past couple of years, I have noticed an infestation amongst several white pines as evidenced by bore holes, white sap and actually hearing th...

Over the past couple of years, I have noticed an infestation amongst several white pines as evidenced by bore holes, white sap and actually hearing the pests at work. I have already lost a couple of trees and hope that you can help identify the issue and a DIY solution that I may implement. I have attached a photo for reference. Any help would be greatly appreciated! 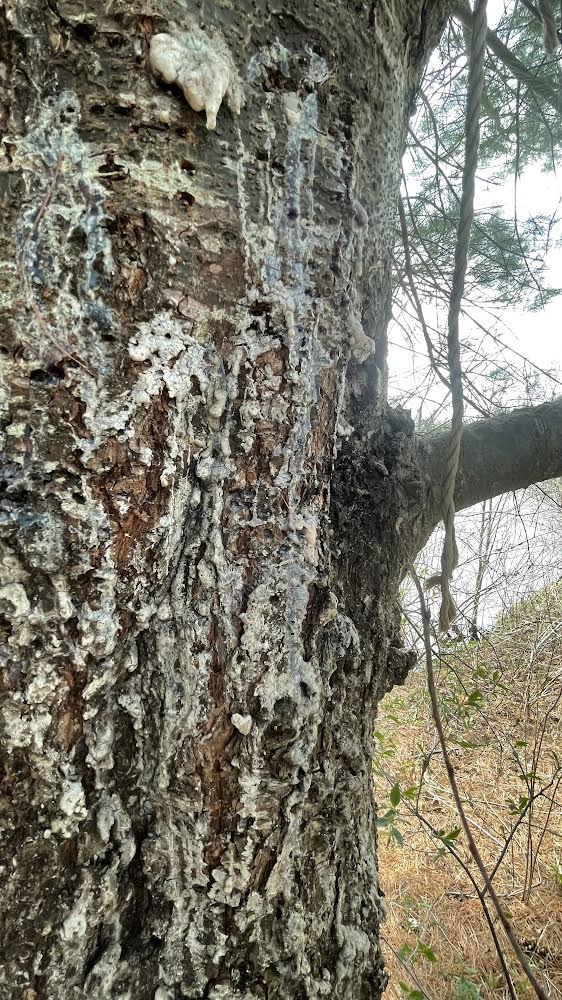 The cause of white pine decline is difficult to diagnose.  If you can hear boring insects in the tree then pine sawyers, Monochamus spp. are most likely the culprit.  Pine sawyers are consider secondary borers that attack declining trees. I do see some larger globs of pitch on the truck.  These might be caused by pitch mass borer.  Pitch mass borer is a primary borer that can attack healthy trees.

Many white pines across the state appear have been struggling the past few years and many have died. The reason for this decline may is likely due to a combination of factors related to cultural and/or environmental problems, but stress related to high summer temps and drought, and  in some cases, soil type seem to be the most likely causes. White pine prefers sunny sites with well-drained soil with a fairly limited range of soil pH (4.5 - 6.0). White pine is one of those trees that show symptoms of yellowing almost at the drop of a hat. Stress brought on by these factors often results in needle discoloration, shorter needles, poor seasonal twig growth, and premature needle loss. With severe or compounding stress factors, the tree may gradually decline and eventually die. Decline may be gradual or rapid, depending on the number and severity of stress factors.

Here is some info on pitch mass borer...

The pitch mass borer, Synanthedon pini (Lepidoptera: Sesiidae), is usually found on several species of pine including Austrian, white, Scots and jack. It will occasionally infest white, Norway, and Colorado blue spruce. The eggs are laid on the bark in mid-summer and larvae burrow into the cambium area, which causes large globs of pitch to form. The caterpillars feed and tunnel around in these pitch masses. Lots of coarse frass may be present and huge amounts of pitch often flow out of the wound area. Trees may break off above the wound area, much like trees severely infested by Zimmerman pine moth. The borer seems to be attracted to wounded trees and the pitch masses are often found at the site of pruning wounds. In situations where the insect is causing damage, avoid pruning or wounding trees in the summer months. Attacks are usually on the lower part of the tree, but larvae may feed higher on the trunk when the populations are high. This insect has a two-year life cycle, that is, the larvae feed for two years before changing into the adult moth. Pupation occurs near the opening of the wound in the tree in June or July. Adult moths begin to appear towards the end of June and may continue to emerge in July and August. This prolonged emergence of adults means that the eggs can potentially be laid from late June through the month of August.

Pitch mass borer is difficult to control with insecticides because of the long ovipositional period and larvae are protected inside the pitch mass. The only way this pest can be controlled is with properly timed insecticide applications when the eggs are hatching and the young caterpillars are burrowing into the bark. Remember, eggs are may be laid from late June through August so insecticides need to be applied at three week intervals beginning around the first of July and continuing to mid-August. Cyfluthrin (sold as Bayer Advanced Vegetable and Garden Insect Spray) or bifenthrin (sold as Ortho Bug B Gon) are among the recommended insecticides for homeowners. Another set of applications may be necessary the following year because of the insect's two-year life cycle.

Be sure to read and follow all the instructions and safety precautions found on the pesticide label before using any pesticide.

*Tell us about your experience with our service by completing the brief (3 min.), anonymous MSU Plant & Pest Diagnostics Survey