The bush looks healthy except for lower area on side where leaves get lighter and lighter and then black/brown appear on edges until most of leaf is gone, what's left is black, and area around looks burned. Same happened last June, sprayed fungicide, but am not sure that is the problem.

Are you able to send us photos of the symptoms as well as of the entire plant (so we can see where it's occurring and how much of the plant is affected)? It could be related to a pest, disease, or environmental issue, so it's difficult to diagnose without visuals.

More information would help us narrow-down causes. Are the "burnt" leaves falling off or staying attached to the stem? Does this happen in spring/early summer only? Do you see any white objects (roughly pea-sized and a bit fluffy) underneath the leaves or on the stems? Has the plant been checked for water recently, since we've been relatively dry this season?

Mira Talabac Replied June 10, 2021, 5:04 PM EDT
Miri,
Hope this transmits -- not sure how to take photo with phone and send from computer.  Can send as text, but this photo gives you idea of what is going on.  The same thing happened last year around this time, then more leaves/branches changed, and bush looked healthy again.  However, no holly berries appeared in fall.
Thanks.
Shirley 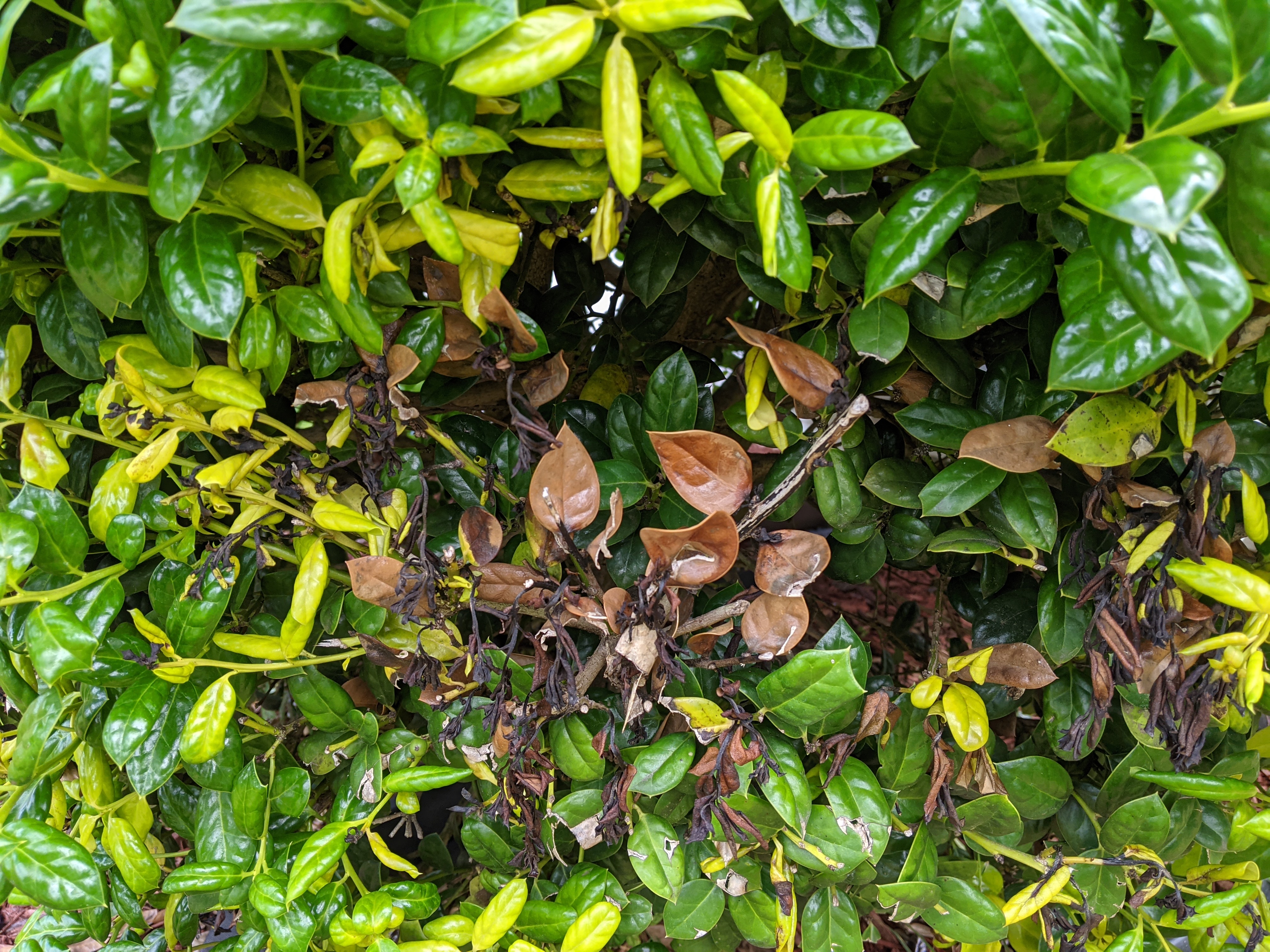 We received the photo, thank you.

Fungicides can sometimes be helpful in controlling fungal diseases, but have their limitations in controlling bacterial diseases, and are preventative measures only. Often, infection takes place weeks or months before symptoms manifest, and since fungicides are unfortunately not curative, they will have little to no effect when applied too late. Frustratingly, many infections are asymptomatic or very subtle during the early stages of disease, so gardeners don't necessarily know treatments are needed during the window of opportunity for prevention.

These symptoms are difficult to pin-down to a particular disease; it could be at least partially due to environmental stresses. Can you share photos of the plant overall (where we can see some of its surroundings)? Did you happen to trim out the damaged stems last year when this occurred?

The lack of berries could be due to stress (as plants tend to abort developing fruit in such cases, like from drought) or due to poor pollination. This looks like a variety of Chinese holly, which tend to be self-fruitful (not requiring pollination, as most hollies do). Cool and/or wet weather during the flowering period can prevent pollinating insects from flying, though, and since holly is insect-pollinated, that could explain the poor berry set. Hollies are also known to start developing berries after bloom but then shedding them before they're ripe because of infertility.

Is there a sprinkler system in the yard that runs regularly? Or a roof downspout drain that empties near the holly?

With the additional photo(s), we'll see if we notice any conditions that could promote disease or root loss, or a pattern of dieback that suggests one particular disease over another. In the meantime, all you can do is to trim out the dead and dying growth and monitor the plant for new symptoms. As with other plantings in general, it will help to check for watering needs as we move into summer and our typical prolonged dry spells. While hollies like Chinese holly have good drought tolerance, they are more resilient when given supplemental water as needed.