I have what appears to be insect damage at the base of my red oak. There is "sawdust" accumulation on the bark. Is this something to worry about and what can I do? 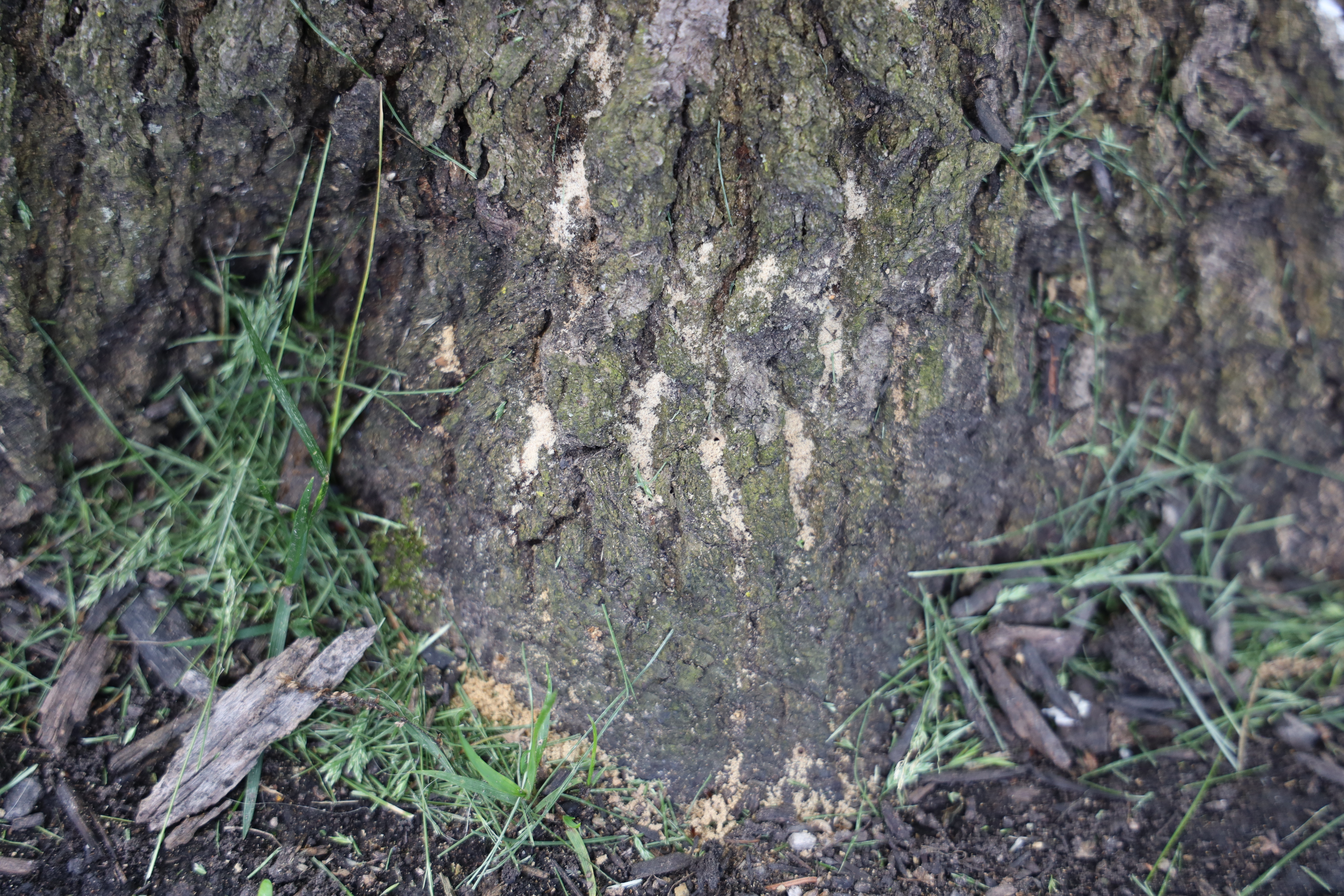 Two insects that leave sawdust on tree trunks are carpenter ants and carpenterworms.  https://apps.extension.umn.edu/garden/diagnose/plant/deciduous/oak/branchessawdust.html  You do not indicate the health of the tree.  Carpenter ants do not eat wood, they tunnel and nest in dead wood, so they would not be in a healthy tree.  This North Dakota State University photo shows some carpenterworm damage:  https://www.ag.ndsu.edu/cpr/horticulture/carpenterworm-in-trees-6-21-12.  The University of California provides some information for carpenterworm control:  https://www.extension.purdue.edu/extmedia/FNR/FNR-227-W.pdf.  But, there are other possibilities.  Purdue Extension has an article addressing many borers, including carpenterworm, long-horned beetles and red oak borer:  https://www.extension.purdue.edu/extmedia/FNR/FNR-227-W.pdf.  (Good news:  The dreaded Asian Longhorned Beetle neither frequents oak or is known to be in your area of Ohio.)  So, there are a number of possibilities.  I suggest you more closely examine the bark to see from where the sawdust is coming.  Note the nature, size and pattern of the holes or wounds, the health of that area of the tree, and any sap or insect activity.  Hopefully, you will be able to make a more positive identification from the information above.

Thank you for your question.

Gregory Cada MGV Replied May 25, 2020, 3:25 PM EDT
The holes are tiny.  Maybe between 1 and 2 mm.  They are distributed in a small area near the base of the tree on the north west quadrant.

The tree is healthy, but the limbs above the area of infestation do appear to be struggling.

I cannot tell how much of the tree is involved from the image.  It could be just a small section or it could be the majority of the tree.  Ambrosia beetles don’t do a lot of direct damage, but they introduce fungi that they feed on.  This fungi can clog some of the vascular tissue, but the holes made by the beetles entering and exiting are avenues for opportunistic decay fungi.

It’s not uncommon to see ambrosia beetles only attacking one flare which happens when that part of the main stem is in trouble.  Oaks can have sections die out without the entire tree necessarily being in trouble.  It’s common after roots on that side of the tree have suffered a problem (e.g. construction digging).  It’s not a good thing, but it happens and the trees may cope with it.

However, if most of the trunk flare roots are under attack, it means that all of those stem sections above the flare are declining.  And, in reality, there’s nothing we can effectively do about it.  The reality is that the beetles are attacking a tree, or part of the tree, that is not being protected by the tree’s defenses.  Reversing that is not something that we can do.

You should consider providing water during a drought … even if you can’t provide all of the water the tree needs, it’s better than no water at all.  You should stay away from fertilizer applications which contribute to more new growth and less defense.  Also, insecticide applications are a no-go because the females are already tunneling inside the tree and releasing the ambrosia fungi to feed their larvae.

We recommend that the tree be eventually assessed by a Board Certified Master Arborist.  A Certified Arborist is an entry level arborist and may not have the experience to accurately or fully evaluate the condition of the tree.