My family has had this cactus for decades. Mine came from a cutting from the original which has broader (flat) branches than mine and blooms, large reddish flowers, generally in the winter.  While I'd like to know the proper cactus name, I'm more interested in the brownish scaley growths (they start off creamy colored, then get more tan).  They are hard, don't flake off, seem to grow in random locations on the branches. They seem to be more unsightly than damaging, but is it sunburn or a fungus or ....  ?     The cactus hasn't  had great light in a few years and now has a better location but this scaley growth has been around for 2 or 3 yrs.   I need to repot the cactus, improve the soil...and I was going to try to root some cuttings incase the main plant dies.  Can I avoid the brown scale continuing?  Can it be treated? Can it be safely ignored? 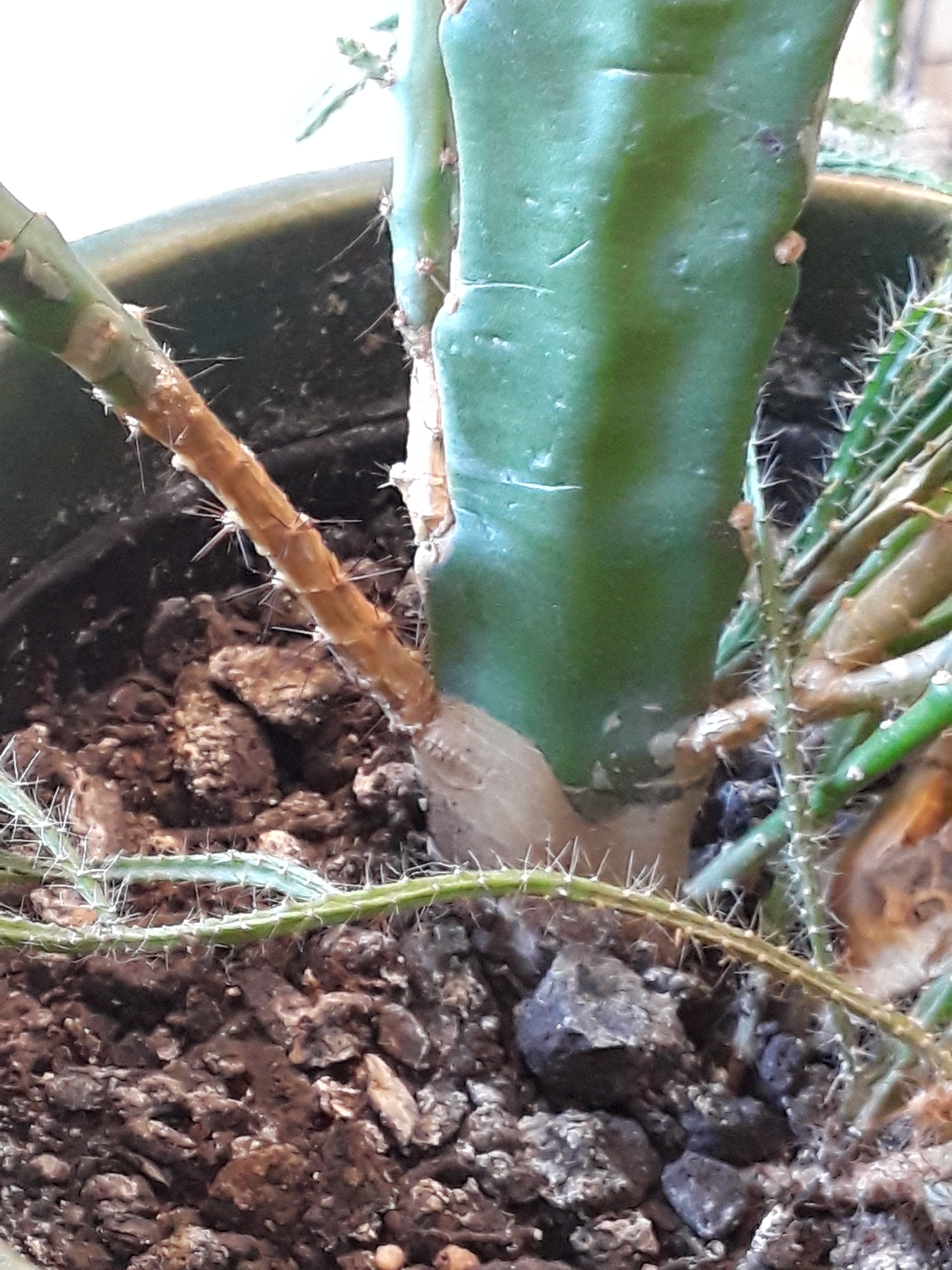 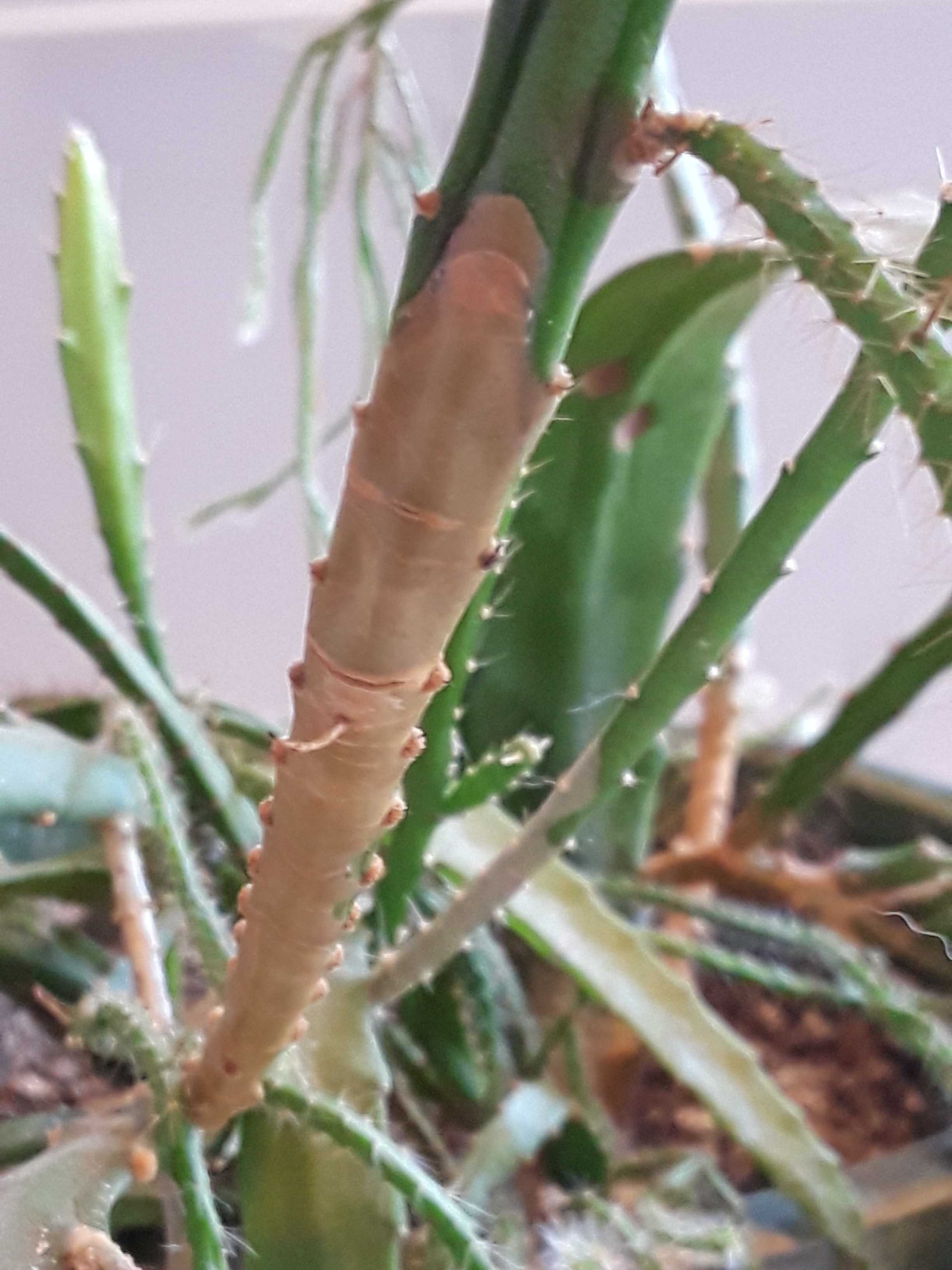 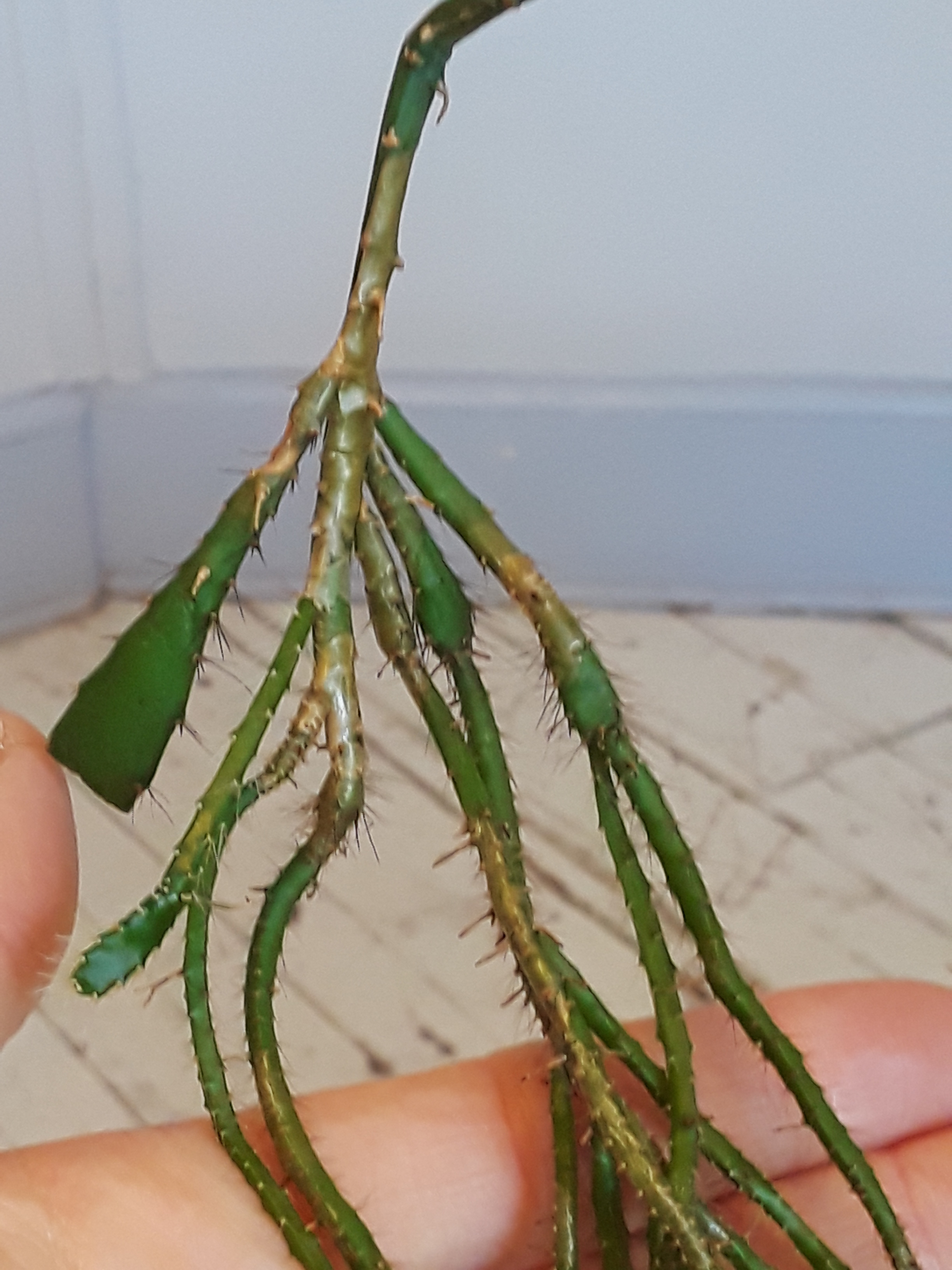 Hi - We reached out to an expert in cacti and succulents to try and get information about the brown patches you have on your plant. We have not received a reply yet but will let you know if we receive information from him. It is possible that these brown areas are actually normal for the type of cactus you have, which looks like a type of Epiphyllum.

Epiphyllums are very different from the typical desert cacti that like dry conditions. Epiphyllums grow in tropical jungles and like high humidity, frequent water, and regular feeding. We recommend re-potting your plant into fresh potting medium containing some perlite to allow for good drainage. You may have some salt/mineral build-up (white residue on the surface) in the current medium so it would be good to replace it with fresh.

Epiphyllums like regular watering (don't leave the soil dry for long between waterings) and let your tap water sit in open air for at least 24 hours to let chlorine and/or fluoride dissipate before using it to water the plant. Fertilizer (at half strength) every two weeks from March - October is recommended. You can place the plant outdoors in the summer (when the nighttime temperature is consistently above 50F); the plant will enjoy the outdoor humidity. Place it in a location where it will get filtered light, not direct sun.

Home and Garden Information Cent University of Maryland Extension Replied May 12, 2020, 4:38 PM EDT
Hi - We did receive additional information from a cactus specialist regarding the brown areas on your plant. In short, this is a condition that can be addressed by improving the growing environment for the plant. Here are his comments:

From the habit of the plant I suspect it is one of the tropical cacti such as Hylocereus or Selenicereus. Plants in both genera are commonly grown house plants and often have the common names of "night blooming cereus" and "queen of the night". These plants produce long, sprawling stems, many of which are cladodes: flattened stems which function as leaves. These plants grow best in bright light conditions, but not necessarily all day sun, and need more water than typical desert type cacti.
While tropical cacti such as Hylocereus or Selenicereus are occasionally infected by several fungal diseases, these diseases usually initially manifest as tan spotting, often surrounded by a yellow border. The spotting may coalesce into larger tan irregular areas but usually there are always typical spots remaining. The plant does not appear to be infected with one of these fungal diseases.
These tropical cacti are also subject to stem bacterial infections, but these usually initially begin at the lower stem at, or slightly below, the soil level. The lower stem lesions are often brown, or black, and are usually soft to the touch. In this case the lower vascular system is disrupted or destroyed and the primary symptom is wilting and drooping of the upper stems. While there can be some brown discoloration of the upper stems, usually plant death occurs too rapidly for this to occur.  The symptoms on your plant do not look like the result of a bacterial infection.
Browning discoloration of the plant stem can occur as an abiotic condition known as "corking". The browning is somewhat analogous to bark formation as old epidermal (surface) tissue loses its active chlorophyll tissue, browns, and hardens. This usually occurs on the oldest stem tissue near the base of the plant. However, if the overall health of the plant is poor due to inadequate environmental or cultural conditions, the corking can appear on younger parts of the plant.

On tropical cacti, the predominant cause of this enhanced corking is a water deficit in the plant tissue caused either by insufficient water in the potting medium, or insufficient root mass to absorb adequate water from the potting medium, or both.
Inadequate light levels can also plant a role in premature corking. Basically, excessive tissue corking is usually caused by poor growing conditions, which is often the result of treating tropical cacti like desert cacti. The tropical cacti need to be grown more like holiday cacti, e.g. Schlumbergera spp.. They need a well-draining potting medium than is not allowed to go dry for long periods and good light, but not necessarily hours and hours of direct sun. The tropical cacti also require warmer winter conditions that most other typical desert cacti.

Christa
Home and Garden Information Cent University of Maryland Extension Replied May 13, 2020, 2:41 PM EDT
This is so very helpful, thank you!  I had read about corking earlier so this confirms a bit of a suspicion, and reduces the fear (if you will) of bacteria, fungus, other issues.  I am now in a location where I can provide a better growing environment and will both repot with fresh soil, and will take the advice on letting the water sit a day before using.