I have had this pothos for close to 6 months now. I have always known it to be a jade pothos and it has never shown me any different but off and on i would get a yellow leaf, at first i thought it needed more light and when i moved it closer to the north-west window it took off in growth, i was happy untill i needed that shelf space for something else i moved it back from the window about a foot and now it has stopped growing. I did reciently do a treatment with pepermint oil and water trying to get rid of fungas gnats but unfortunaely i didnt dilute it enough so some of the leaves bruned. I cut those off and everything looked good untill i started getting turning leaves. I though pothos could tolerate lower light, though i would say a foot away from the window is far from low light. It is happening to all of my leaves slowly, these three are the main ones though. Anything can help i dont know what i am doing wrong 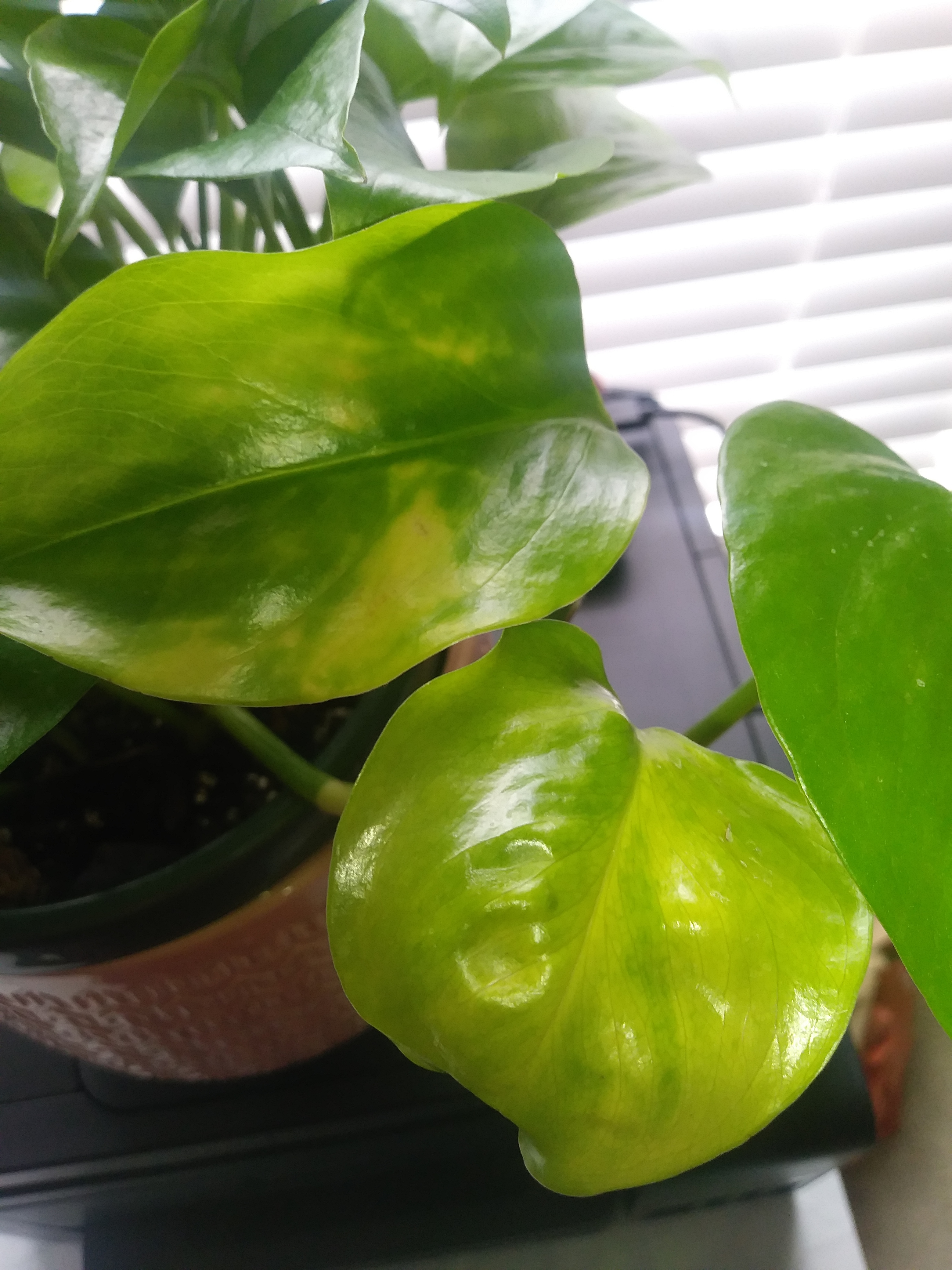 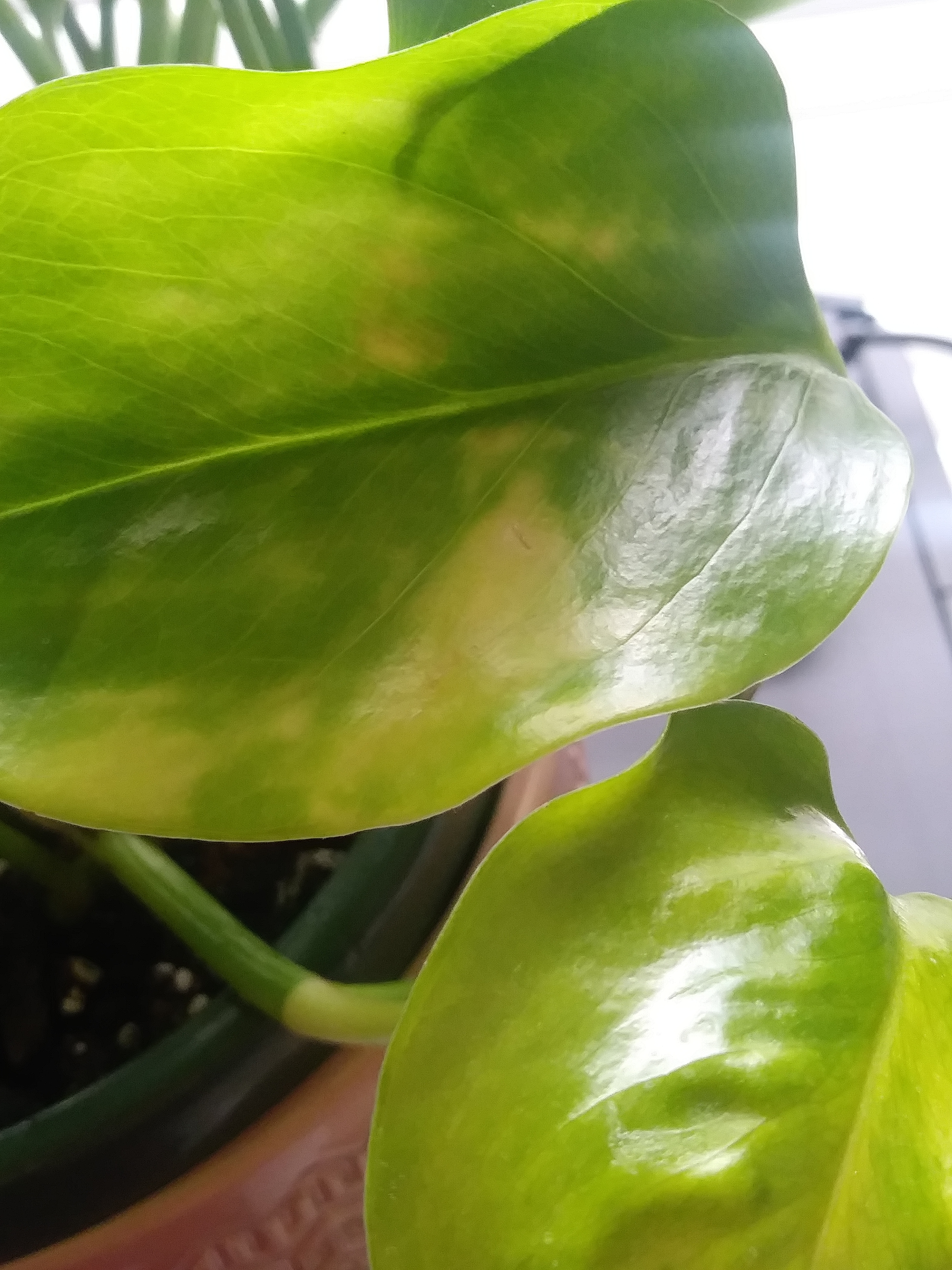 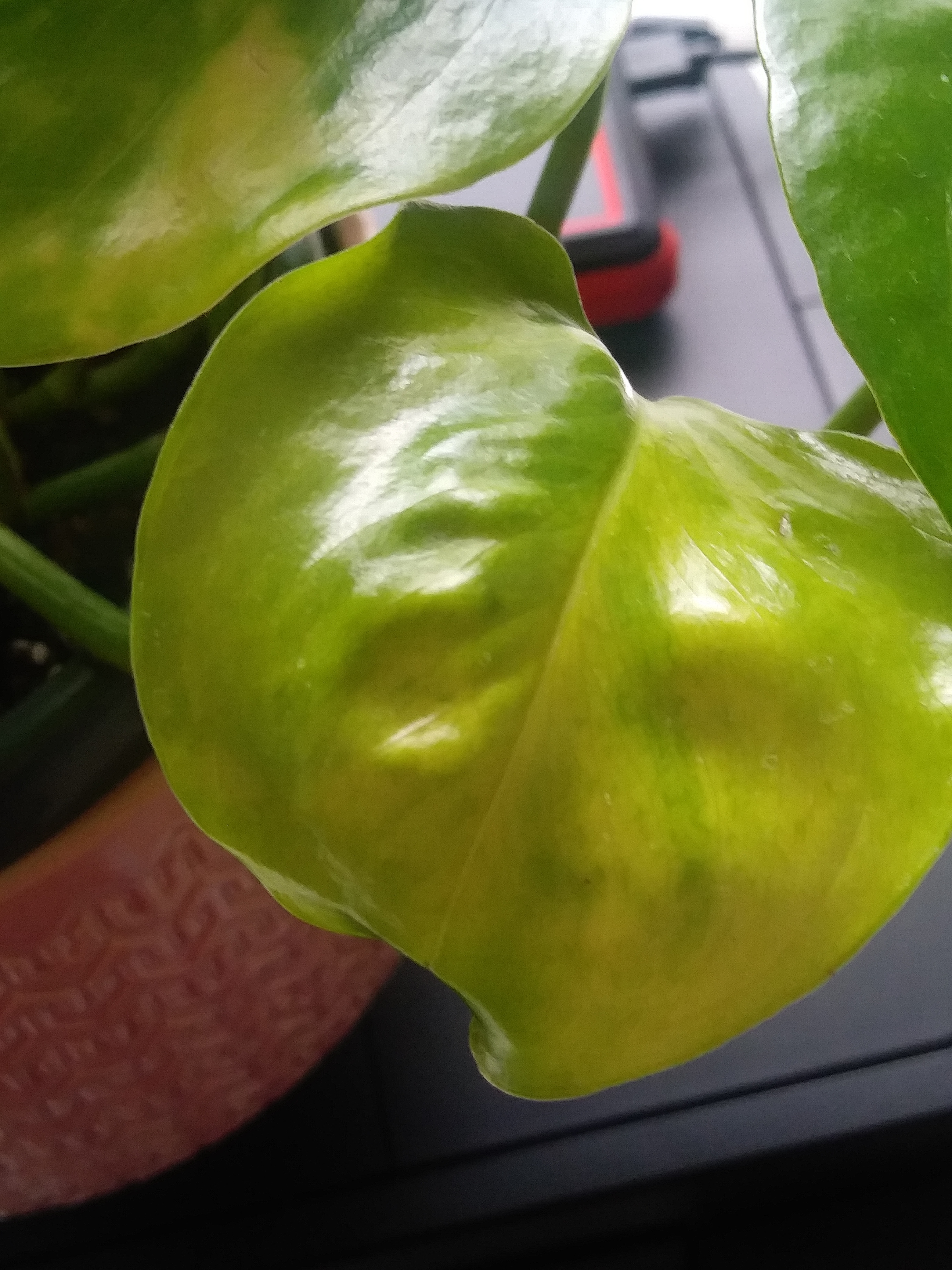 If the yellowing leaves in the past have been on older growth (on vining plants, these would be leaves near the base of the stem closer to the pot), then this is normal. Leaves have a lifespan and, after the plant has enough younger growth, they are eventually shed. This sort of yellowing before dropping would be a bright, lemony-yellow color and fairly even change of color throughout the whole leaf. Yellowing younger growth would have different causes - pest or disease stresses, nutrient deficiency, or root loss due to over- or under-watering.

The yellow spotting or bleaching is at least partially likely from the peppermint oil, as you suggest. Phytotoxicity is the result of tissue damage from chemical exposure; it can occur when benign treatments are over-used, improperly diluted, or applied in the wrong conditions. Peppermint oil is not an effective treatment for fungus gnats, as their larvae feed in the soil and the adults do not feed on or walk around on the plant. Instead, the best approach would be to dry the soil out more between waterings and, if the potting soil is around a year old, to repot the plant in fresh soil. You can also use yellow insect sticky traps to help monitor adult populations as well as keeping those trapped from breeding. Watering the pothos with a solution of B.t.i. (often sold for mosquito control) will also kill the larvae in the soil; it will be harmless to other organisms. https://extension.umd.edu/hgic/topics/fungus-gnats-houseplants

Pothos grow best when the soil is allowed to dry a bit more than other houseplants; they can struggle when kept constantly moist. Saucers used underneath the pot should be emptied so surplus water doesn't soak back up into the root ball, as this will suffocate the roots. We cannot see the plant size in relation to the pot, but it's possible this plant is outgrowing its pot and can be shifted to one pot size larger. Spring is a good time to repot houseplants; use fresh potting mix and try to discard as much old soil around the roots as possible.

Once the plant is settled in a new soil and a new pot, if applicable, you can see if signs of nutrient deficiency develop. The reason to wait is that unhealthy roots will not be able to absorb nutrients that are already present in the soil, so adding more will not help and would likely damage the roots further. If the plant needs to regrow roots, this will take time. This page is written more for outdoor plants, but the same symptoms can appear in potted plants: https://extension.umd.edu/hgic/topics/nutrient-deficiency. If needed, use of a complete fertilizer is best as it will contain the important micronutrients that other fertilizers lack. To find a complete fertilizer, look for one that has multiple nutrients listed on the label beyond the basic "big three," N-P-K (nitrogen, phosphorus, potassium).

Pothos is tolerant of a range of light levels. In homes, lower light is ok, though "medium" levels of light are probably ideal. For plants, reactions to changes in exposure isn't immediate unless leaves sunburn from sudden exposure to light much brighter than they were accustomed to. Sunburned leaves tend to turn more brown than yellow and suffer dry patches due to desiccation. In your case, the changes in light levels aren't likely the cause of the yellowing, though drastically lower light levels will encourage a plant to shed a higher proportion of its older leaves. Root and stem growth tend to feed off of one another - that is, if one stops, it's possible the other has as well. Therefore, prolonged stubborn lack of growth on stems could mean that roots have run out of space or are suffering a setback, like damage. Plants can cycle through growth and "resting" phases, but spring is typically when many houseplants begin more active growth due to increasing daylength and light levels. As you say, a foot away from a window is likely not "low"  light, though the direction the window faces does make a difference. A foot away from a window in front of a window is quite different than a foot away to the side, however, which will be much dimmer.

The best course of action for now is this: reduce watering unless the plant is wilting between soakings; consider repotting the plant into a pot diameter one size larger (say, 3" to 4", or 6" to 8"); and if the gnats persist, try a few courses of the B.t. treatment when the plant needs regular waterings.