Huge numbers of bullfrogs have invaided my pond #593122 - Ask Extension
We live in the country, just south of Eugene. I built a very small water garden with a bubbling rock, lilies, and other marsh and water plants I've ad...

Huge numbers of bullfrogs have invaided my pond #593122

We live in the country, just south of Eugene. I built a very small water garden with a bubbling rock, lilies, and other marsh and water plants I've added. The pond is surrounded with flowers and ornamental grasses I've added to give it a more natural look and blend the rock edge of the pond with the land around it. Up until about a week ago it was a lovely little habitat for insects, birds, and chorus frogs. Then all of a sudden many, many bullfrogs showed up about a week ago and have already eaten almost everything that moves. There must be at least 30 in my small pond, which is only about 4 feet by 6 feet and maybe about 2-3 feet deep at it's deepest. Half of it is a shallow rock shelf for the marsh plants. The bullfrogs are not giant yet with only about 3-4 inch bodies. I've managed to fish some of them out with a jig and red yard, but given how many there are that's slow going and I swear more show up every day. We're at the top of a hill and there is a large cow pond about a mile away in the low area. I've read they migrate though can't imagine why they'd choose our bitty pond over the big one that must have fish and other yummy things to eat. We've made our yard an inviting habitat for wild things... maybe a little too inviting! I'm wondering if there is a more efficient way to get rid of these killers? I've looked at bullfrog traps and see there's one for sale online (Tomahawk Live Trap on livetrap.com), but it's kind of spendy and I'm not sure it'll work. Do you know if it works? The ground is too hard to dig a hole for a bucket trap right now and there's rock and pond liner around the edge of the pond so I couldn't get it very close to the pond anyway. We can't really shoot them due to the potential damage to the pond liner... plus, they're a very small target. I'm feeling a sense of urgency to get them out due to the way they're completely decimating any living thing that gets near the pond. I've seen them leap several inches into the air (from the water) and snatch flying insects right out of the air. All the water bugs, dragonflies, honey bees, tree frogs, and other critters have simply disappeared... probably down the frog's giant gullet! If I have to I'll drain the pond and try and catch them in the bottom of the pond in a net, but I'd rather not do that as it's a terrible waste of water and there's the issue of drying out my shallow marsh plants. Plus, even if I do get rid of the bullfrogs in my pond right now... how do keep new ones from moving in again. It feels a little like a loosing battle, but I'd hate to give up the pond as it was so charming and brought in birds and other wildlife that don't normally visit our feeders. That's why I'm so interested in the trap. I did check with someone who knows frogs and they confirmed these are bullfrogs, which I'd already suspected due to they're huge numbers and the way they've decimated the resident wildlife. Can you offer any advice on how to cope with these prolific little killers? Fishing just a couple out a day isn't working.

Would it be possible to send me a couple of photos of the frogs?
Michael O'Loughlin Replied August 30, 2019, 2:43 PM EDT
This plump fellow was unfortunate enough to get caught by some critter overnight... though it's puzzling that it didn't get eaten too. I'm guessing it's body was around 4" long. 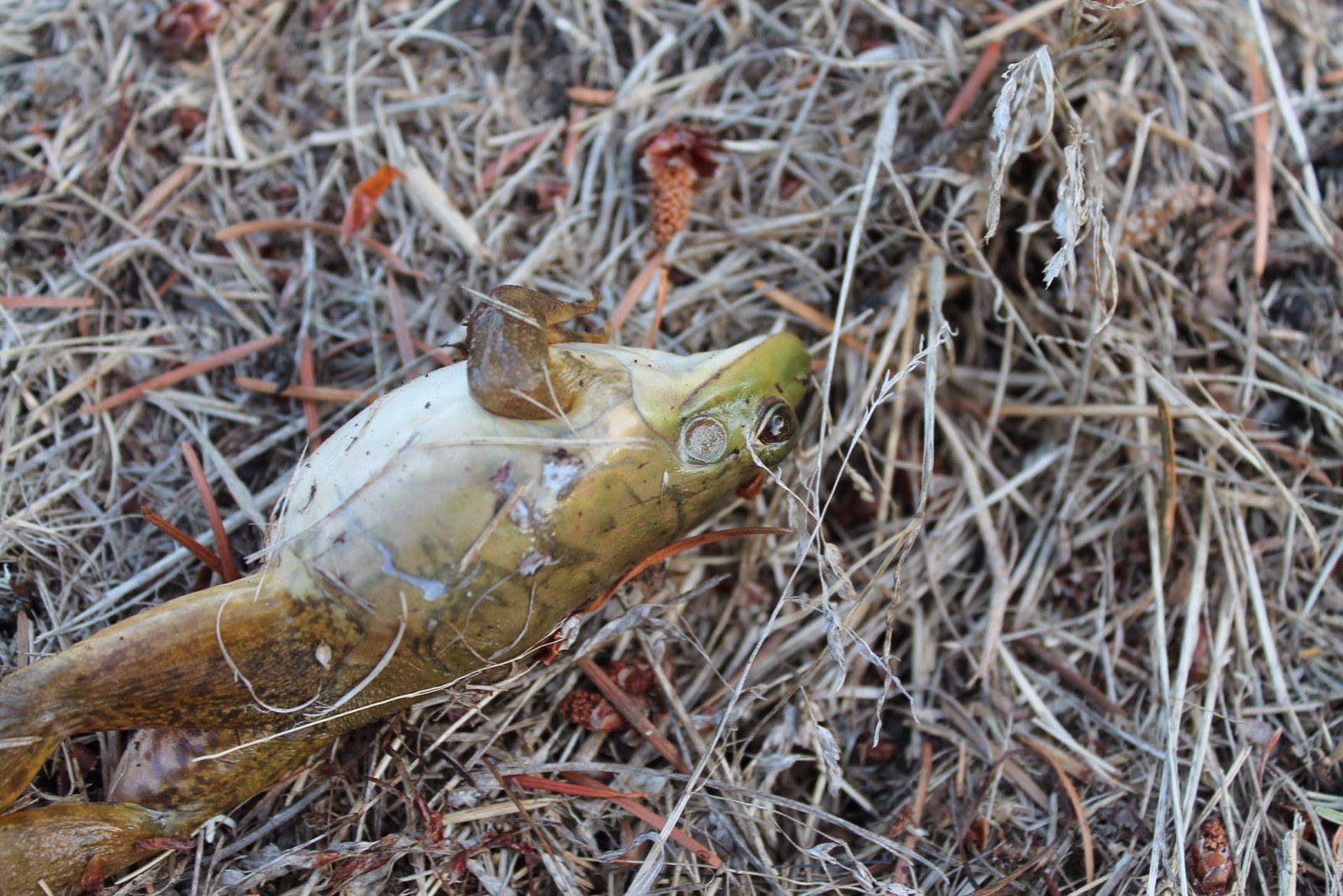 The Question Asker Replied August 30, 2019, 2:57 PM EDT
This is the time of year that the bullfrogs are in their dispersal phase - moving out from their breeding pools to find other suitable habitat. That is why so many showed up at the same time. I suspect the cow pond or other bodies of water nearby provide great habitat to reproduce.

Unfortunately they were first introduced in 1917 by the Fish and Game Commission (Oregon Department of Fish and Wildlife) and after repeated attempts to get populations established in Oregon they stopped importing them and instead started rearing them in Oregon fish hatcheries by the millions which then were released across the state. Getting rid of them is no longer possible. I suspect they will come back to your pond every year.

You can choose to leave the pond as is and remove as many by hand but complete eradication will be difficult. They move at night so that is a good time to catch them. They can adapt so use as many different capturing techniques and traps as possible making sure you do not kill any red-legged frogs (Rana aurora) by accident.

If you make the pond a little shallower and remove some of the cover, that will make them more vulnerable to predators such as herons and raccoons. You might also put out some tin or small boards where garter snakes can hide. They too will eat the bullfrogs.

It sounds like this is a new situation so I suspect that when predators figure out there is an available food source at your pond, they will frequent it as well. If you see the frogs breeding in your pond, drain it each year to kill the tadpoles. The smaller tree frog tadpoles are likely to transform early and if not they can easily be separated out and returned to the pond.

Good luck. I am sure it is frustrating.


Michael O'Loughlin Replied August 30, 2019, 7:46 PM EDT
Thank you for your very informative reply. It's a little discouraging but helpful to know this is probably a seasonal migration. I've managed to catch and kill 25 by hand jigging with a hook and yarn. Still, many escape. They do get wise to my tricky ways. Your advice to change methods is spot on. I made a homemade trap modeled on the commercial version, but it didn't work as I've yet to come up with effective bait. We do have raccoons who frequent the pond. If they're catching frogs, it's not making much difference. I've yet to notice additional predators, but fingers crossed! The pond water is badly fouled, so once the extended rains start I'll drain it and catch any remaining bullfrogs, as fishing them out by hand is quite time consuming. I've also ordered a bullfrog repellent (Pest-Rid), which theoretically drives frogs away. We'll see how that goes. While fishing for bullfrogs the pretty little frog in the attached photos came out of hiding. It was immediately obvious it's not a bullfrog so I was careful not to catch it. It looks and acts completely different. I'm wondering, is this a red leg frog? Thanks again for your help! 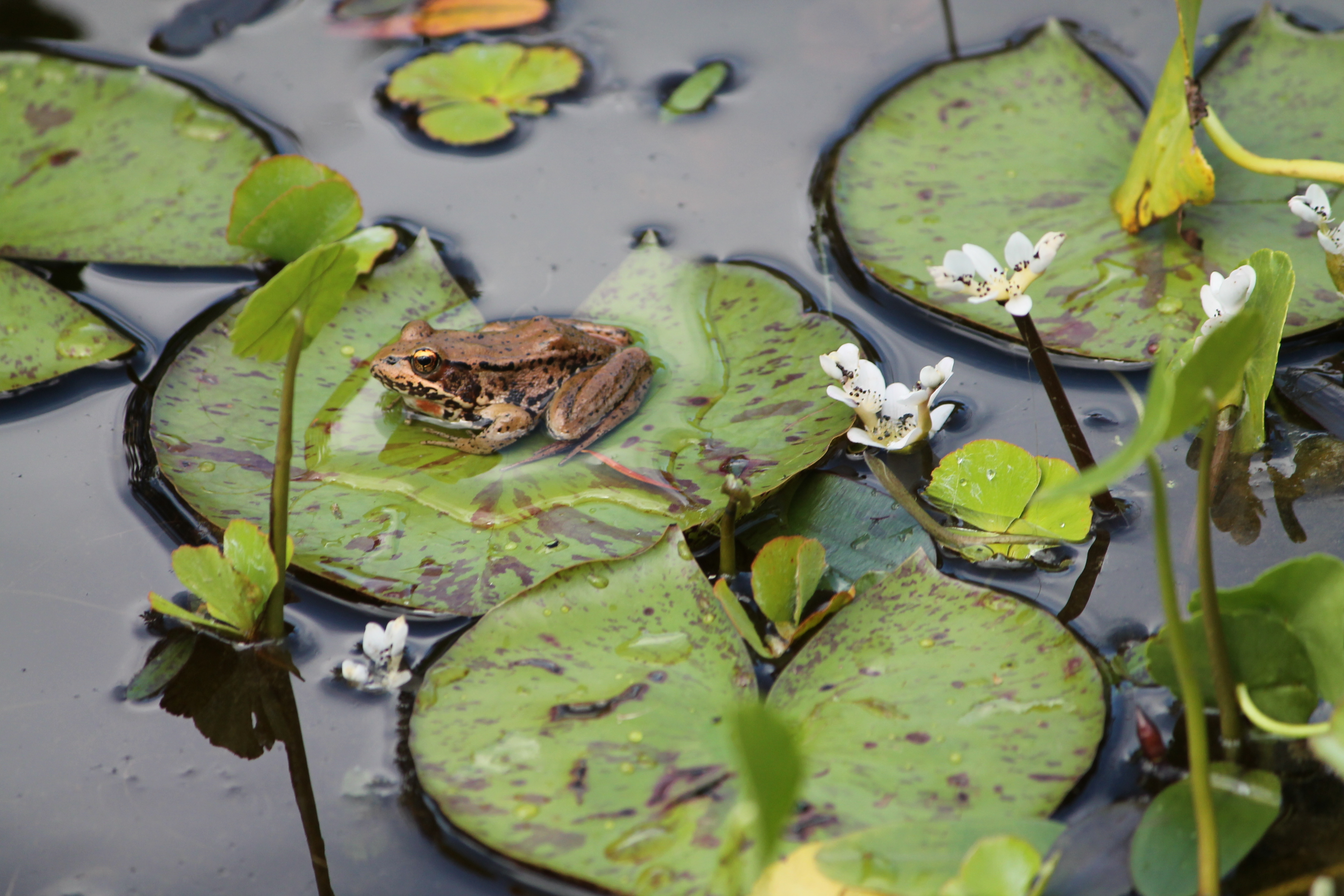 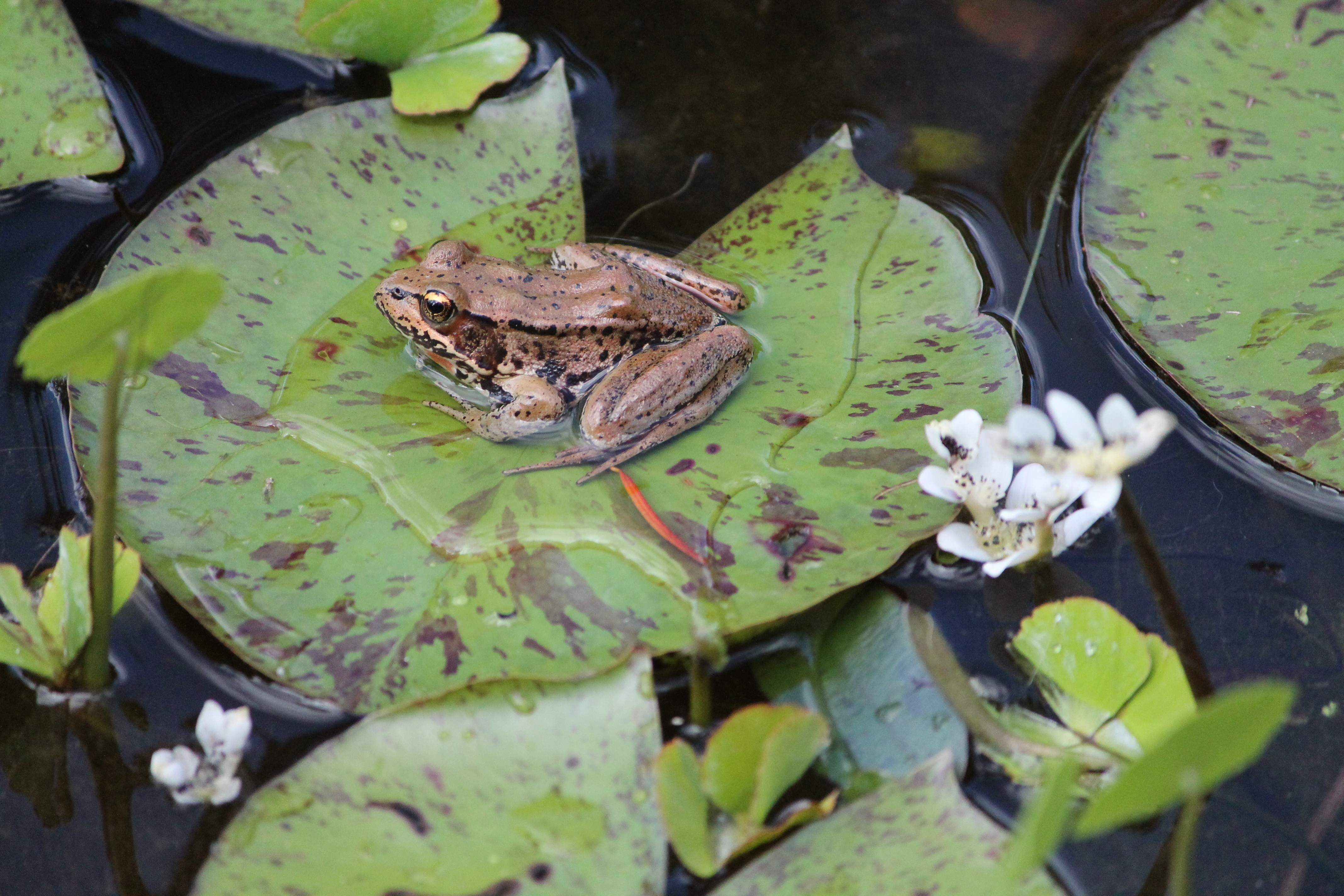 The Question Asker Replied September 09, 2019, 4:50 PM EDT
Yes, that is a Northern red-legged frog (Rana aurora). It is one of our many wonderful native frogs and with the recent rain, they will be moving around quite a bit.
Michael O'Loughlin Replied September 09, 2019, 5:01 PM EDT
Extension Members | Privacy | Contact Us | Terms of Use | Training