I have had this hydrangea for over 13 years, but several years ago, I introduced a rose bush that became diseased. I would cut the diseased portions off, put Bayer Rose Care 3-1 around the base and then continue the battle. The disease then infected another near by rose bush and my hydrangea. We removed both rose bushes last year. The hydrangea seemed to be recovering and produced 1 bloom this year, but then the leaves developed black spots. I sprayed Ortho Rose and Shrub Disease, Mite and Pest Control on the diseased leaves, but the disease continued to spread. I tried cutting off the diseased leaves and stems, but the disease continued to spread. There were a few yellow leaves with black spots at the bottom that I cut off and threw away. I have attached the latest pictures of the hydrangea. I really appreciate any help you can give. Thanks, 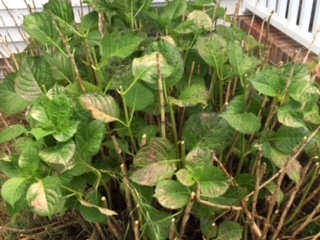 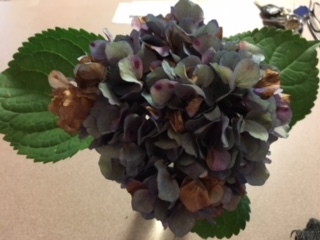 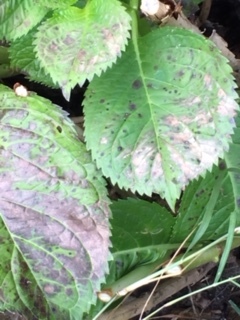 We think your difficulties with these plants are mainly due to abiotic problems, meaning not from pests or diseases but environmental issues, including plant placement and damage from pesticide applications.

Hydrangeas and roses do not share any disease pathogens, so one did not infect the other.
Hydrangea require part to mostly shade while roses need more sun so one of the two were destined to be unhappy.
The damage on the present hydrangea leaves looks like foliage burn, called phytotoxicity, from your chemical spray applications. This can happen if label directions are not followed, and often if done during hot weather.
Hydrangea almost always get some late season leaf spot disease, but it is minor and does not require treatment.
As far as sparse bloom, that can be caused by harsh winters, which kill back old wood to the ground (these bloom on stems/buds formed during the previous growing season) or from the placement of the plant if the warmth of your foundation encourages early bud break which then can be nipped by late frosts.

We suggest holding off on all pesticide applications until you correctly diagnose what is bothering your plants.
We are always here and happy to help with that.