Thanks so much for your previous answer.  I have watered the tree regularly throughout the winter.  The ends of the shoots don't look like Cooley spruce gall.  I took some more pictures, which I hope will show the twisted black tufts a little better, but they're hard to see since they're small (about half the length of the green needles that surround them).  It's as if a new tuft of needles had started to sprout but then turned a purplish brown or black and shriveled.  I'm not sure what you mean by needles turning brown "from the outside inward" --- do you mean from the outside of each needle or from the perimeter of the tree towards the trunk?  In image 5393, the affected buds are on the extreme left of the photo.  Again, there's quite a large area of the tree that now has no needles.  Should trunks of very young trees be wrapped in the summer to protect against sun scald? (Not the spruce, which would be too difficult.)  Thanks for any info. and for your time. 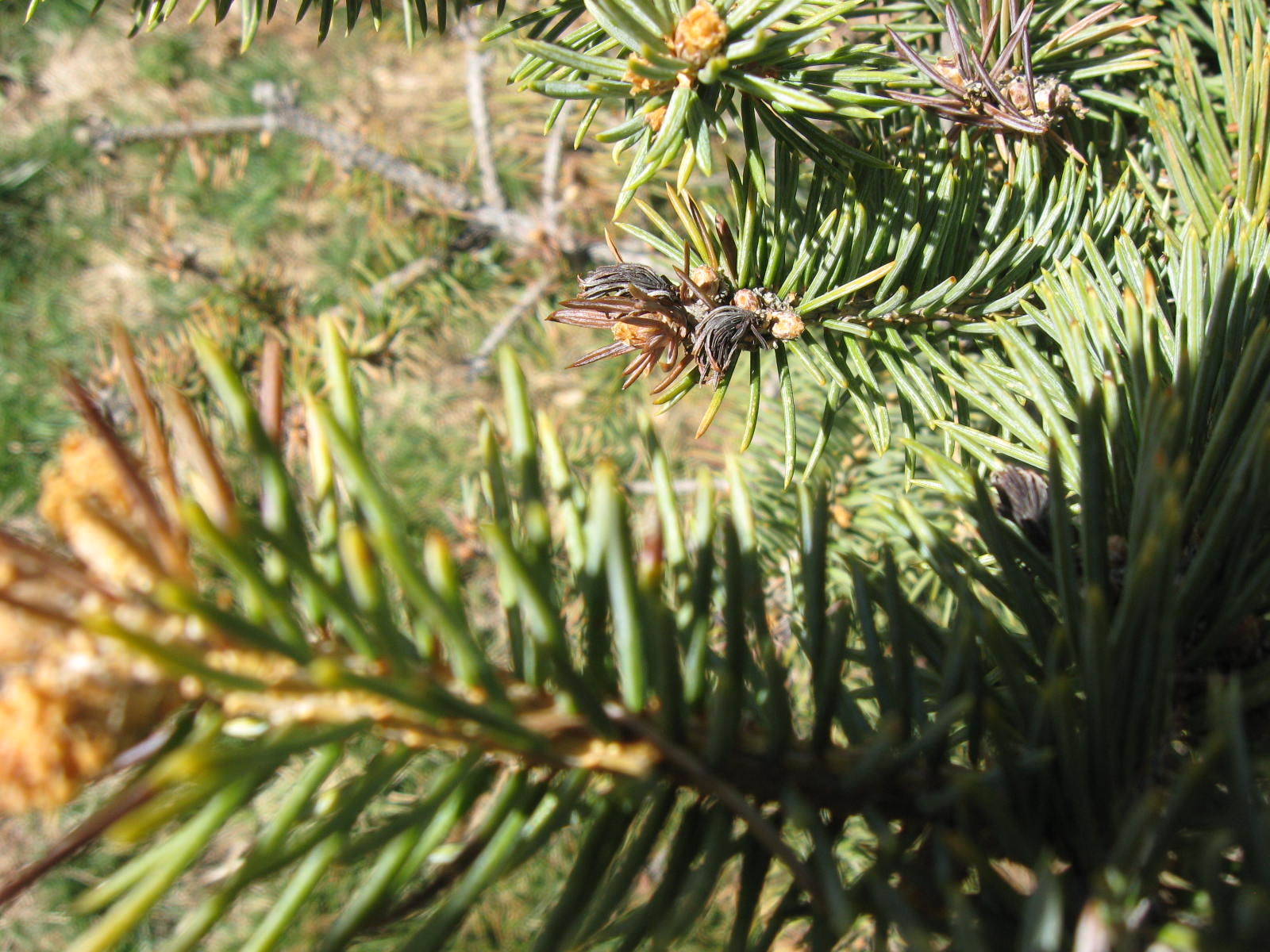 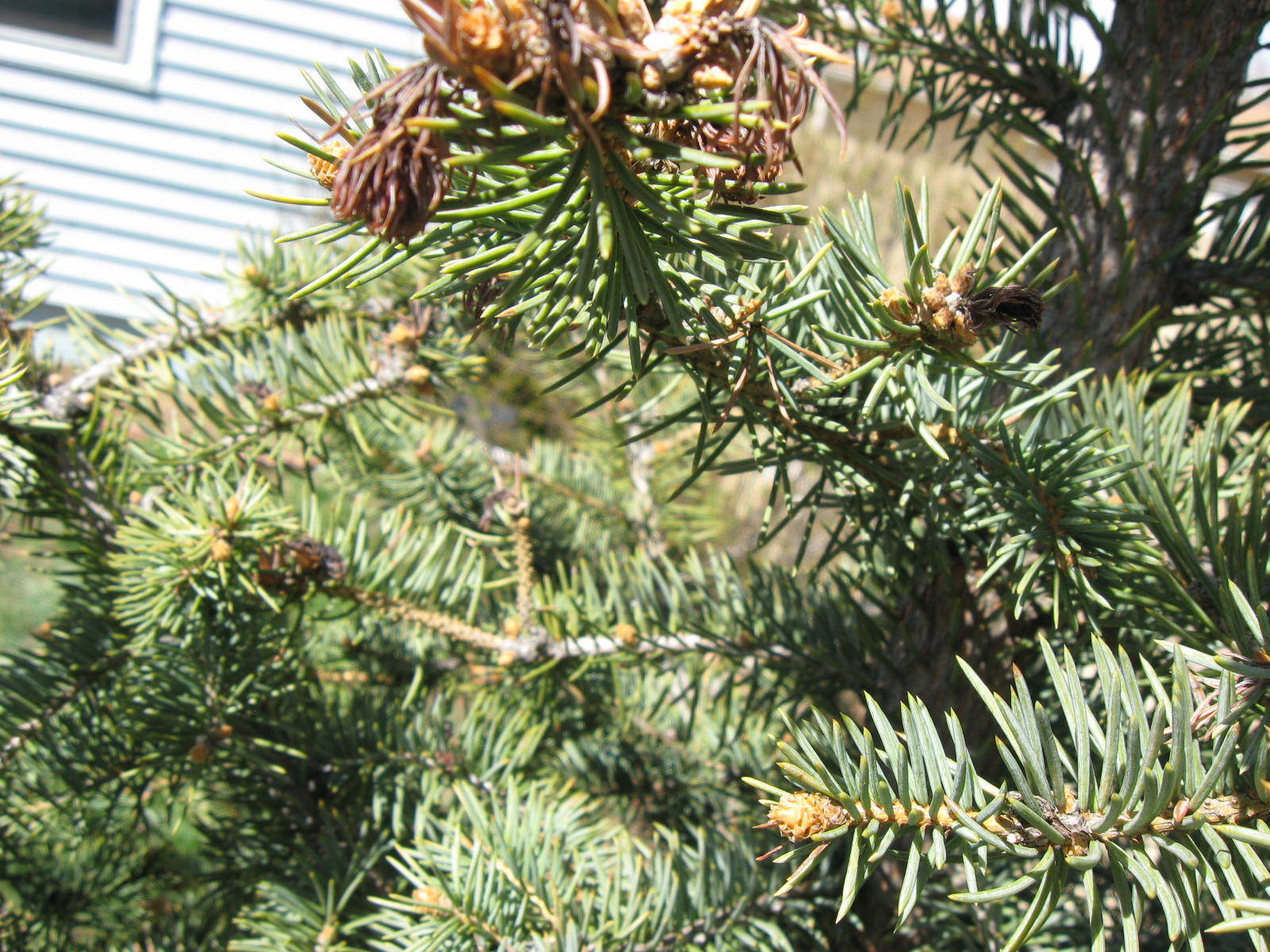 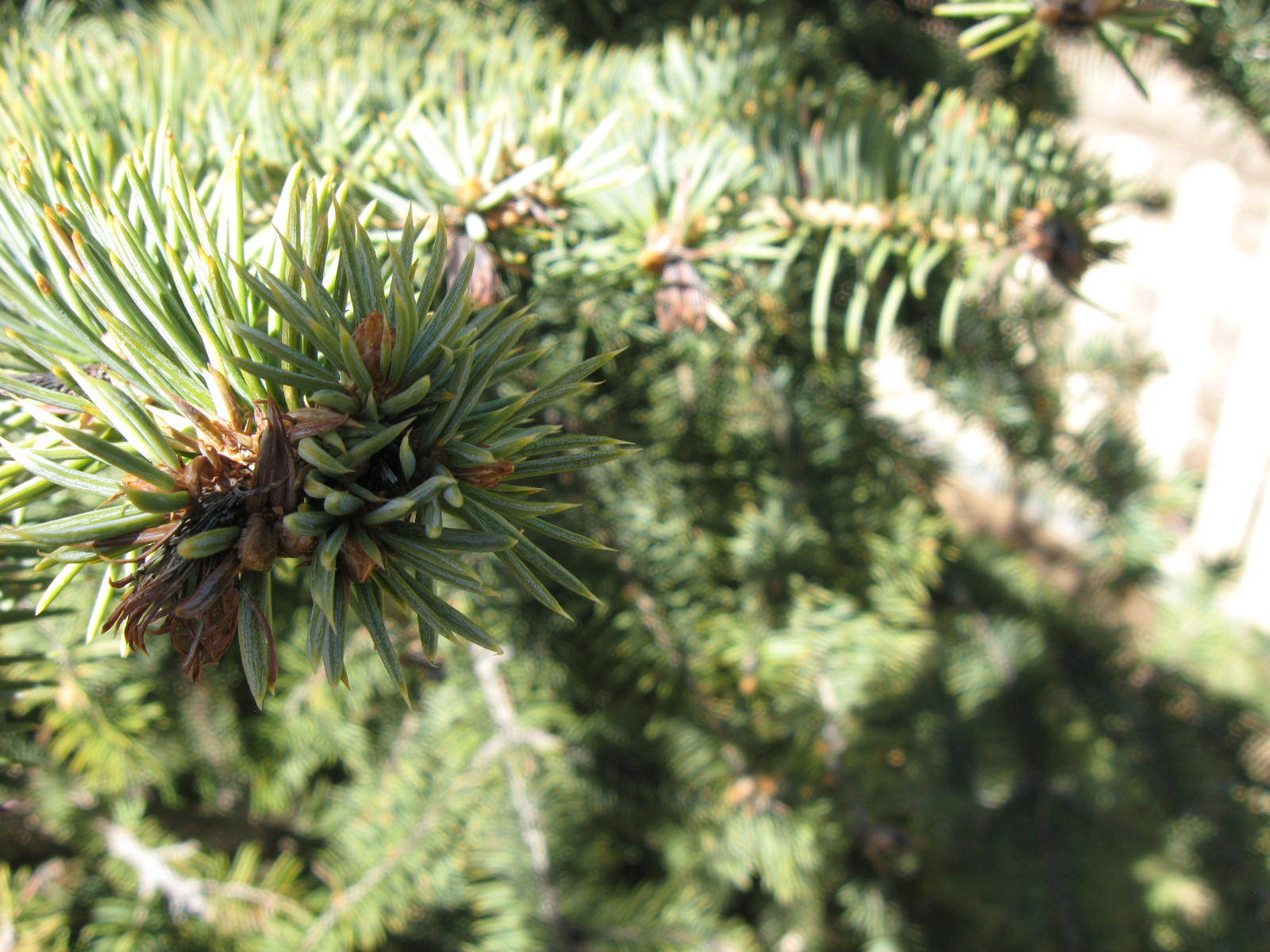 The blackened, shriveled tufts definitely could be the result of tender, new tissue having been frozen.

These new photos show what appear to be additional buds that have yet to push growth. I recommend monitoring those; barring another round of cold temperatures, they should develop normally. If they do, I think you've got your answer.

If they don't, bring in a sample to your local Extension office (Denver Extension is located at 888 E. Illiff in Harvard Gulch park) where it can be examined (there's a $5 fee). Also bring in a photo of the whole tree. However, my money's on frozen tissue.

It's not normal for needles to turn brown starting at the new growth at the branch tips and moving in towards the trunk ('outside, in') and often signals a lack of hydration. (It is normal for needles to drop beginning at the trunk and working out toward the tips ('inside, out') because the oldest needles get shaded out as the tree grows and fall eventually). The first scenario often signals the failure of a recently-transplanted conifer to establish, or winter desiccation due to a lack of water at the roots combined with dry, ambient air conditions.

You did good to water your tree regularly this winter, but it's possible that the water didn't sink deep enough into the root ball to keep the roots uniformly and sufficiently moist. If the large area where the tree has lost its needles corresponds with the south or southwest side of the tree, or it corresponds with an element of the surrounding landscape that's apt to heat up during the winter (concrete streets, rock mulch, brick wall of a house or garage, etc), it's another good sign the needle loss is a result of winter desiccation.

I do not recommend wrapping young deciduous trees during the growing season. Typically, the canopy of the tree is sufficient to protect the trunk. If your situation is such that the tree needs additional protection, consider shielding it with other plantings or erect a temporary shade structure with shade cloth or a board.
Gardening Help Replied April 01, 2016, 2:00 PM EDT
Thanks so much for your responses and time.  I'll keep an eye on it and keep it watered.  I did contact a city arborist who will also come out and look.
The Question Asker Replied April 01, 2016, 3:44 PM EDT