can you help identify this plant? 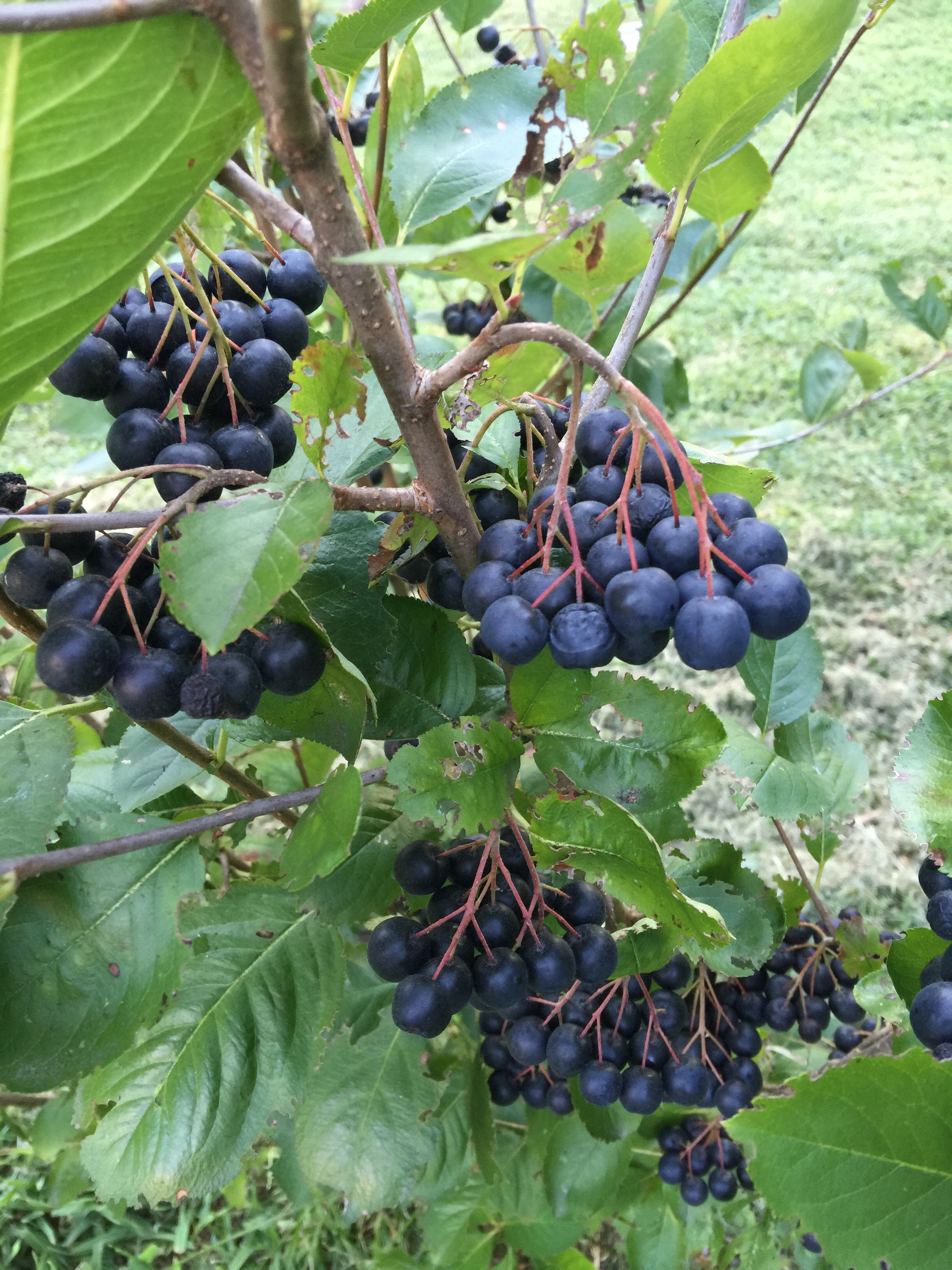 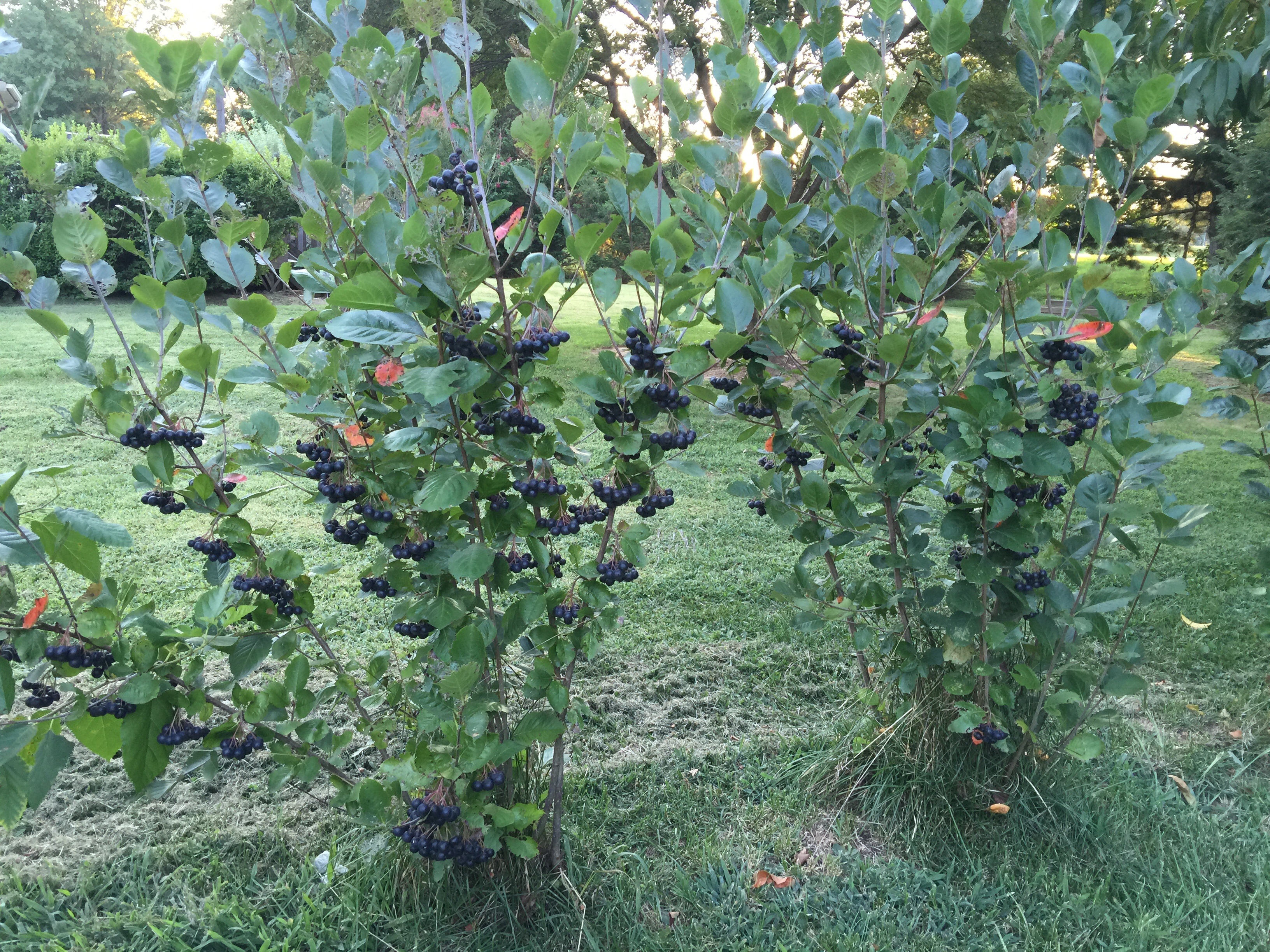 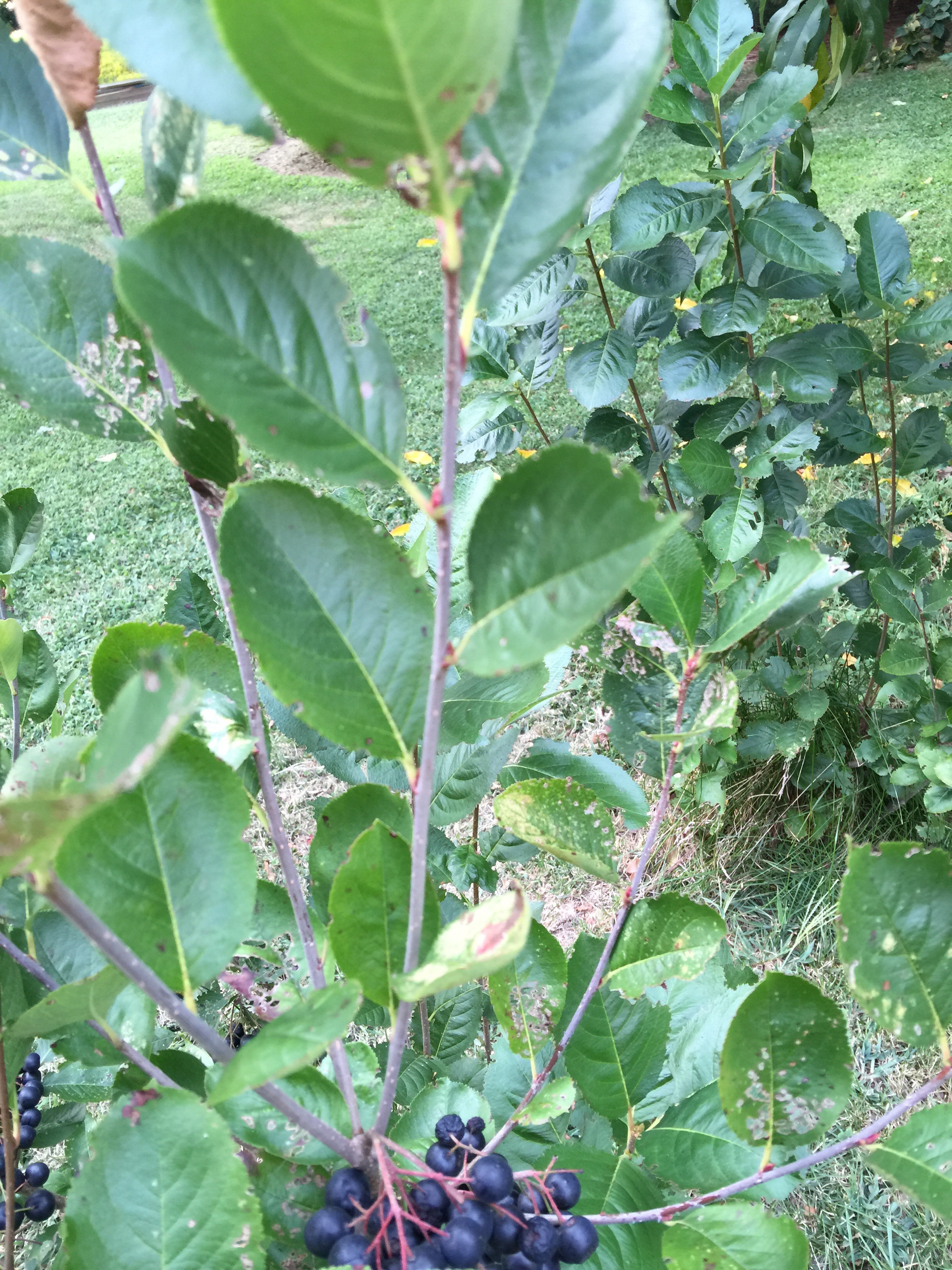 From what I can determine from your photos this appears to be the Aronia berry or the ‘black chokeberry’. The plant will become established at 3-4’ tall with a similar spread. It has white blossoms in the spring and the fruit ripens to a deep black in September. The plant is self pollinating, preferring a sunny location with 5.8-6.2 pH and well drained soil. Included is some additional information on the growing of Aronia plants from Iowa University. For positive identification submit a sample to the Master Gardener plant ID at 461 Wyoming Rd Newark, DE. Or contact the Garden Line at 302-831-8862

A super-nutritious berry. Rich in vitamin C and antioxidants, these blueberry-sized berries are tasty fresh with a little sweetener or made into a healthy juice or wine. In spring, the bush is covered with clusters of white, sweetly scented flowers followed by shiny green berries that turn deep black as they ripen. Brilliant fiery-red fall color of the foliage makes the plant seasonally attractive in the landscape. Easy to grow once established, with tolerance to drought and salty soils. Pest- and disease-resistant. Cold-hardy. Ripens in September. Self pollinating.

Aronia (Photinia melanocarpa, formerly Aronia melanocarpa) is commonly known as “black chokeberry,” although the preferred common name used by individuals who sell the berries or products made from them is “aronia berry” or simply “aronia.” Aronia is a woody perennial shrub in the rosaceae family that is native to the eastern United States and hardy to zone three. It grows in full sun and along woodland edges. In recent years, most of its native habitat has been lost to field crops and urbanization (Hardin 1973).

Aronia is a plant that has benefited from increased interest in phytonutrients, plant compounds that have beneficial effects on human health. Evidence of health benefits is accumulating from large population studies, human feeding studies, and cell culture studies. Interest in “eating healthy” has led to worldwide growth in the popularity of aronia berries and products made from them. This in turn has led to the planting of aronia as an alternative cash crop in the Midwest (Trinklein 2007).

This plant should not be confused with chokecherry (Prunus virginiana), which is also a native American plant somewhat similar to aronia in appearance, but whose leaves, stems, and seeds contain toxic amounts of prussic acid (Trinklein 2007).

Aronia plants are long lived and survive for several decades. They are deciduous woody shrubs with 40 or more stems per bush at maturity (Trinklein 2007). They tolerate full sun or partial shade; however, in commercial plantings, full sun is recommended for uniform fruit ripening. They are well adapted to a wide range of soil drainage classes from poorly drained to excessively well drained, but they will do best in well-drained soils.

Aronia produces loose clusters of 10 to 15 berries at the ends of shoots. Individual berries are firm and about one-quarter inch in diameter. The fruit ripen from late August through mid-September. The fruit tend to hang well on the plant, allowing for a broad harvest window of four to six weeks (Hardin 1973). Although the fruit is often referred to as a berry, the plant is closely related to the apple and the fruit is a pome, not a berry. Unlike apples, however, aronia is self-fruitful and does not require a pollinator for fertilization and fruit set. Therefore, only one cultivar is required for fruit production.

Like other fruit crops, aronia develops its next season’s fruit buds while maturing its current season’s crop; hence a grower is always managing two crops at once. Aronia has a chilling requirement, meaning that a cold period, or rest, is required before flowering. Actual chill requirements have not been determined.

Aronia has been grown as a commercial berry crop in most Eastern European countries since the 1950s. Large-scale commercial cultivation of aronia started in the Soviet Union in the late 1940s as a means for producing their own source of vitamin C and reached 43,984 acres in 1984 (Kask 1987). According to the Polish Ministry of Agriculture and Rural Development in Warsaw, there were 11,119 acres in Poland in 2004. One year later the number had grown to 12,355 acres. One Polish company alone sold 40,000 tons of aronia juice (Kampuse and Kampuss 2006). In Europe, new business startups that use aronia berries as an ingredient have increased from just two launches in 1997 to 108 in 2007 (McNally 2008).

Two years after planting, aronia shrubs produce about two pounds of berries per bush when planted at eight feet in-row. By the third year after planting, berry production is about 3 to 5 pounds of fruit per bush. Production levels off at 15 to 20 pounds of fruit per plant (at in-row spacing of eight feet on center) by the fifth or sixth year in commercial plantings in Western Iowa. When in-row spacing is halved, yield per plant roughly halves as well. At a 4 foot by 12 foot spacing (900 bushes per acre), yields should average eight to ten thousand pounds of fruit per acre. When processed to juice, one acre should yield 600 to 750 (0.075 gal/pound) gallons after processing loses. On mature plantings in Eastern Europe, yields as high as 37 pounds per bush have been reported. The average yield is around 23 pounds per bush in Eastern Europe (Trinklein 2007).

The Midwest Aronia Association officially formed in 2009 as a non-profit organization. Their “sole purpose is to investigate, improve, and promote all aspects of aronia growing.” The association has focused on developing a network of growers and partners to promote aronia as well as gather production, marketing and farm management resources and information for its member growers (Midwest Aronia Association 2012).

Because fertility guidelines for aronia are not well established, guidelines for apples are often used due to their close botanical relationship. Iron deficiencies have been observed in commercial plantings in the Loess hills of Iowa where the soil pH is often greater than 7.2.

Pruning is required to keep plants at a manageable size, to maintain yields and to facilitate mechanical harvest. As canes age, they become less productive. For maximum yield and plant longevity, annual removal of canes or stems greater than one inch in diameter is required. In mechanically harvested commercial plantings, canes should be removed after their fourth or fifth season to ensure that they are not too tall or too thick to go through a mechanical harvester. Plants should be pruned during late winter or early spring before bud break. Alternatively, the entire plant may be cut back to the ground every ten years and reestablished. Unlike annual pruning, this method will force the plant out of production for several years as the plant reestablishes itself. This method of pruning would not be suitable for commercial plantings harvested mechanically as ten-year-old canes are too large to fit through a mechanical harvester.

Plant spacing is largely dependent on how the plants will be harvested. For hand harvest, rows may be spaced as close as eight feet on center and six to eight feet within the row. This close spacing provides enough room to walk around and harvest fruit from all sides of the plant but may not provide enough room for a vehicle to drive between the rows. To facilitate hand harvesting, row spacing of 10 to 14 feet is recommended. This increased spacing will allow vehicle travel through the row and make it easier to remove fruit from the field. For mechanically harvested fruit, a minimum of ten feet on center is required to get equipment through the rows. Spacing this close is very tight. Row spacing of 12 to 14 feet on center is recommended. In-row spacing for mechanically harvested aronia may be as close as three feet on center for hedge-type plantings or six to eight feet on center for an individual plant system. Based on early observations, an in-row spacing of three to four feet works best for mechanical harvesting. At wider spacing, the mechanical harvesters have difficulty pulling in canes and collecting fruit from the center of the plant. A minimum of 30 feet on row ends is required to maneuver harvest equipment.

Wild aronia is different from the cultivated varieties we grow today in commercial production. Commercially important cultivars in Europe and the United States include Nero, Rubina, Viking, Hugin, Galicjanka, Hakkija, Ahonnen, Kurkumacki, Serina, Morton (also marketed as Iroguois Beauty™) and McKenzie (Jeppson 2000; Strigl et al. 1995). New research indicates cultivars such as Nero, Viking, and McKenzie were developed in Eastern Europe and are hybrids of Photinia melanocarpa and Sorbus aucuparia (European mountain ash) There is very little genetic diversity among cultivated aronia. In fact, ‘Nero’, ‘Viking’, and ‘Galicjanka’ are nearly identical when compared through genetic markers (Smolik et al., 2011). Galicjanka, a newly emerging cultivar developed in Poland, is marketed to producers as having a condensed ripening period. This is a highly desirable trait to ensure uniformity across the field for mechanically harvested fruit.

Contrary to common belief, commercial plantings of aronia are not immune to pests. Wildlife including deer, birds, rabbits, and small rodents may be a problem. A deer fence is essential for most new plantings to prevent browsing on young plants. Aronia releases a natural chemical to deter deer from browsing, but it is not sufficient to protect the plant. Two common types of fences are used. Steel and wood fences constructed around the perimeter of the field with a height of eight feet or more are highly effective at excluding deer but also very expensive. A cheaper but less effective solution is a 3D fence. This fence system is two separate fences spaced approximately three feet apart. The outer fence has a single electrified strand at 36 to 48 inches above ground level. The inner fence has three to four strands of wire evenly spaced. Similar to other fruit crops, birds will typically not eat the fruit until it is nearly ripe. The degree of bird damage is highly variable across Iowa and from year to year. Several forms of netting and netting machines are available for purchase or construction if birds become a pest.

Because aronia is in the same family as apples, they potentially share many of the same pests. Possible insect pests for aronia include apple maggot, brown marmorated stink bug, cherry fruit worm, grasshoppers, Japanese beetle, spotted winged drosophila and tarnished plant bug. These pests are not active in all regions of aronia production, so scouting is important to determine if management is required. There are very few insecticides labeled for use on aronia making control options limited. Some products include, Actara, Assail, Avaunt, Entrust, and Sevin. Insecticide labels frequently change and may differ from state to state. Always read the label before making applications. Contact your local county extension office for assistance. Observed diseases include cedar-quince (or hawthorn) rust and cedar-apple rust although healthy aronia plants seem to be very tolerant of these diseases. Yield most likely will not be effected by these diseases but lesions will be present on the leaves. Plants may also be susceptible to fire blight but documented cases are very rare. Plants should be mulched to control weeds and conserve soil moisture. Controlling weeds with a string trimmer (“weed eater”) or mowing under plants may damage canes and result in loss of fruit production and make plants susceptible to disease infestation. Controlling weeds, especially during establishment, is critical to a healthy planting. It is always a good idea to reduce the weed seed population before planting any perennial crop through the appropriate use of cover crop or fallowing the ground.