A neighbor took this picture, and after looking at numerous insect pix on the web, we can't identify it. It's a beautiful blue fly/bee/what? Can you tell? Thanks. 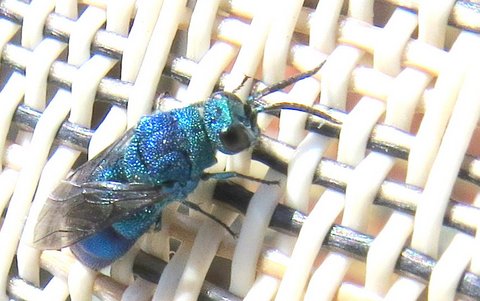 I'm attaching the other photo you sent and reassigning this to someone to assist you with this.

You will be receiving additional email on this question from an expert. 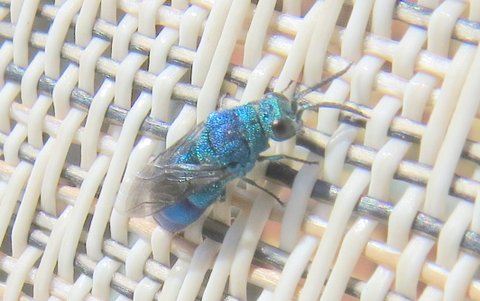 Amy Hays Replied May 30, 2014, 9:55 AM EDT
An excellent photo of an insect most people, even many entomologists, would probably not recognize. The beautiful insect in your photo is called a "cuckoo wasp" (Order: Hymenoptera, Family: Chrysididae). They are also sometimes called jewel wasps, gold wasps, or emerald wasps. There are many different kinds of cuckoo wasps, and all are brilliantly colored with metallic, blues, greens and reds like the one in your photo. Most of the more common cuckoo wasps are cleptoparasitic. This means that they lay their eggs in the nests of other insects, mostly ground nesting bees and wasps. When the cuckoo wasp larva hatches, it eats the host wasp or bee larva and then continues feeding on the stored food in the nest, either pollen or dead insects. The cuckoo wasp gets its name from cuckoo birds because some species of cuckoo birds also lay their eggs in the nests of other birds, and then let the host parents raise them. In your photo you can see the heavy sculpturing, little pits and reticulations on the upper side of the wasp. These help strengthen the exoskeleton of the wasps, and the wasps can also curl up their abdomens underneath them to form a little armored ball. This helps protect them from the jaws of bees and wasps when they try to invade the nests. There are a few other species of cuckoo wasps that are not cleptoparasites, but rather are direct parasitoids of walking sticks or sawflies. In this case the wasp lays its egg directly into the host insect, and the wasp larva eats the host from the inside and eventually kills it. If you look up cuckoo wasp on the internet, you can find lots of pictures and more information about these fascinating and beautiful insects.
Gary Parsons Replied May 30, 2014, 11:37 AM EDT