Attached are photos I took of my rhubarb plant today. I received this plant from a friend in Leadville, I'm in Alma (both high elevations). She told me it was a division from what she was told was a 100 year old plant?! It was a large root ball when I planted it last spring, with no stalks. It grew very large last year but I didn't harvest any since I had just transplanted it. As it's coming up this spring, it looks to me like there are 3 plants/crowns. Should I divide it this spring before it starts getting large or should I wait since I just planted it last year?...or maybe I shouldn't divide it & rhubarb just grows this way...I'm just worried about overcrowding it. Thanks! 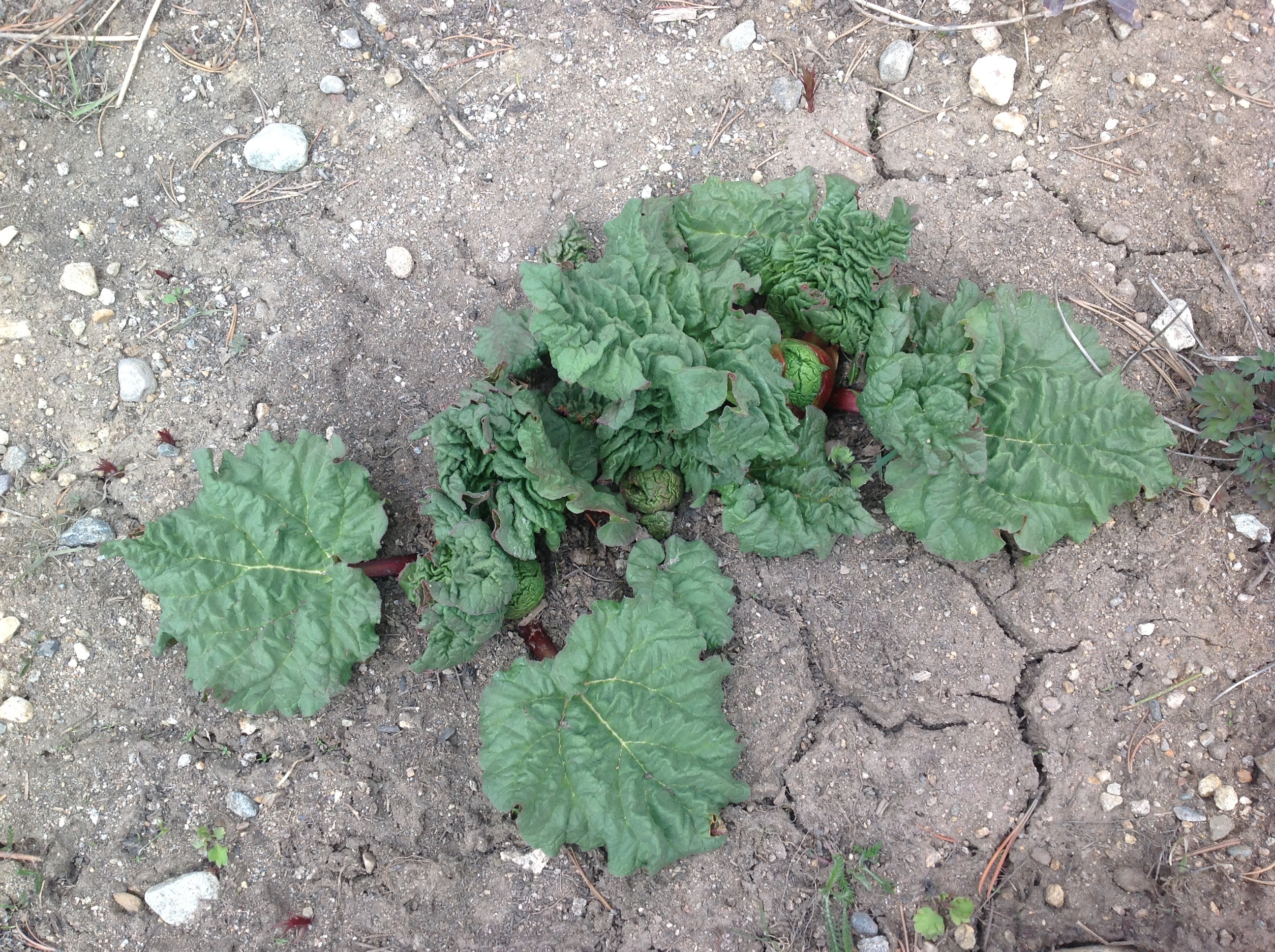 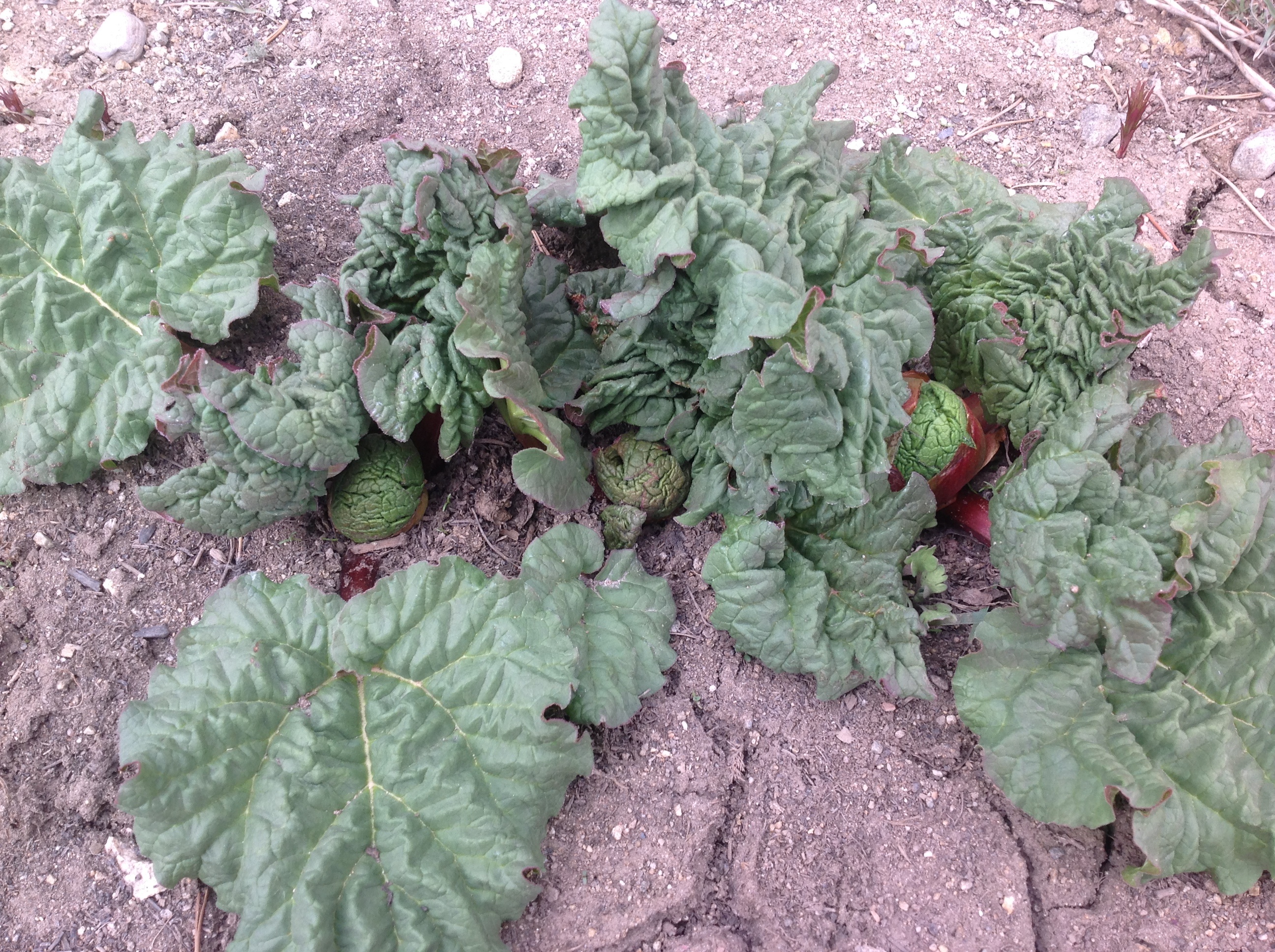 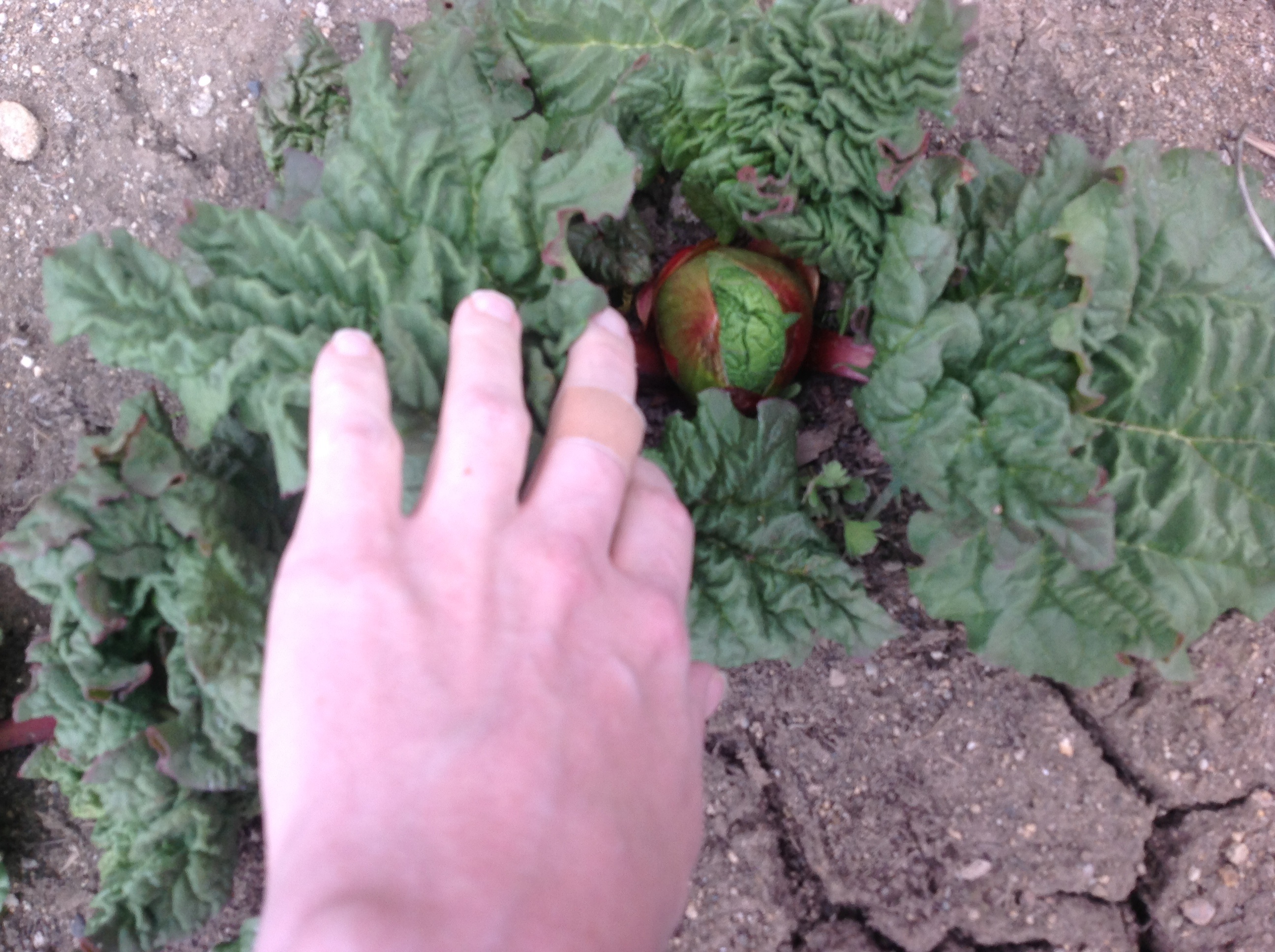 Renovation and Other Management

Rhubarb is a perennial crop that will remain productive for many years before it requires renovation or crown divisions. Renovate beds when plants become crowded and leaf stems small (usually in 5 to 15 years). Dividing the crowns keeps plantings vigorous and productive. If plants are not divided periodically, they will steadily decrease in productivity and be more prone to insects, diseases, and bolting (see below). Renovation is done during late winter or early spring and involves digging and lifting whole crowns or splitting them in place with a sharp spade. If the crown is lifted whole, it is divided into pieces and replanted using sets that have at least two to three buds. Replanting can be done in the same site or a new site, though the latter is recommended. If the crown is split in place, a piece is lifted out and a piece is left in the ground where it will regrow and renew the planting. The divisions should provide many new crowns for a second planting. Avoid replanting any diseased, soft, or rotten crowns.
Bolting or seed-stalk formation is induced by physiological stress and the age of the planting. The tendency to bolt is also a varietal characteristic. The green-stalked varieties are more susceptible than red varieties. Environmental stress factors that cause bolting include low fertility levels, excessive heat, intervals of heat and cold, shorter day lengths (for sensitive varieties), and drought. The age of the planting is also a factor, and excessive bolting is often an indicator that renovation and crown division are needed. Bolting usually occurs midway through the season after the plants have developed a full canopy. The flower stalks should be cut out while they are still young and not allowed to mature and develop seeds. Removing seed stalks will increase crown bud formation and yields in the following year.

I would not divide it for a few more years. Wait until it shows the signs mentioned above.
Debbie Lester Replied May 30, 2013, 12:10 PM EDT
Thank you! It's been about one month since my initial question & photos. Below are photos I took today. Looks like it is bolting. We have had unseasonably warm temps this week, but maybe this is a sign I should divide it also? 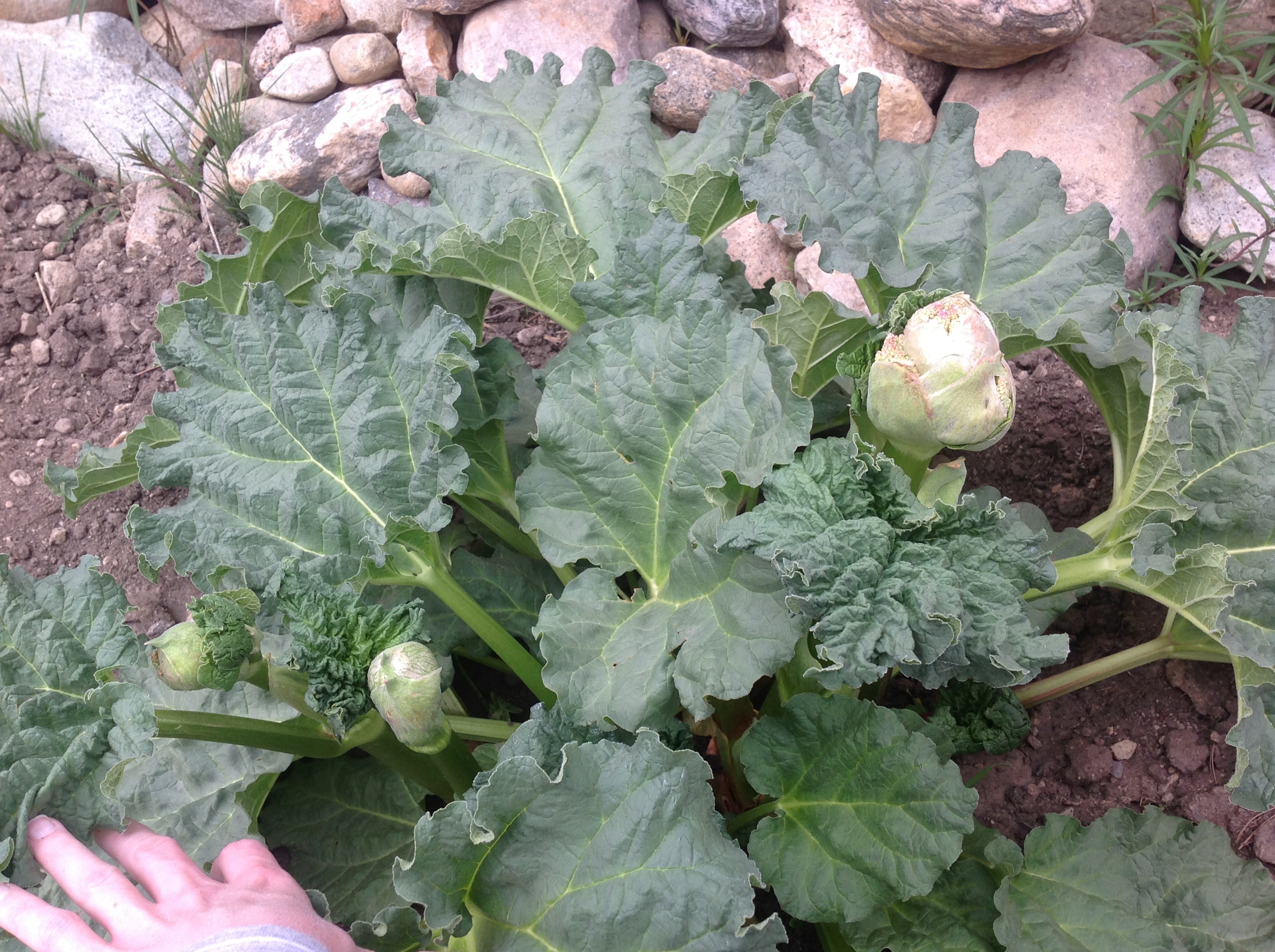 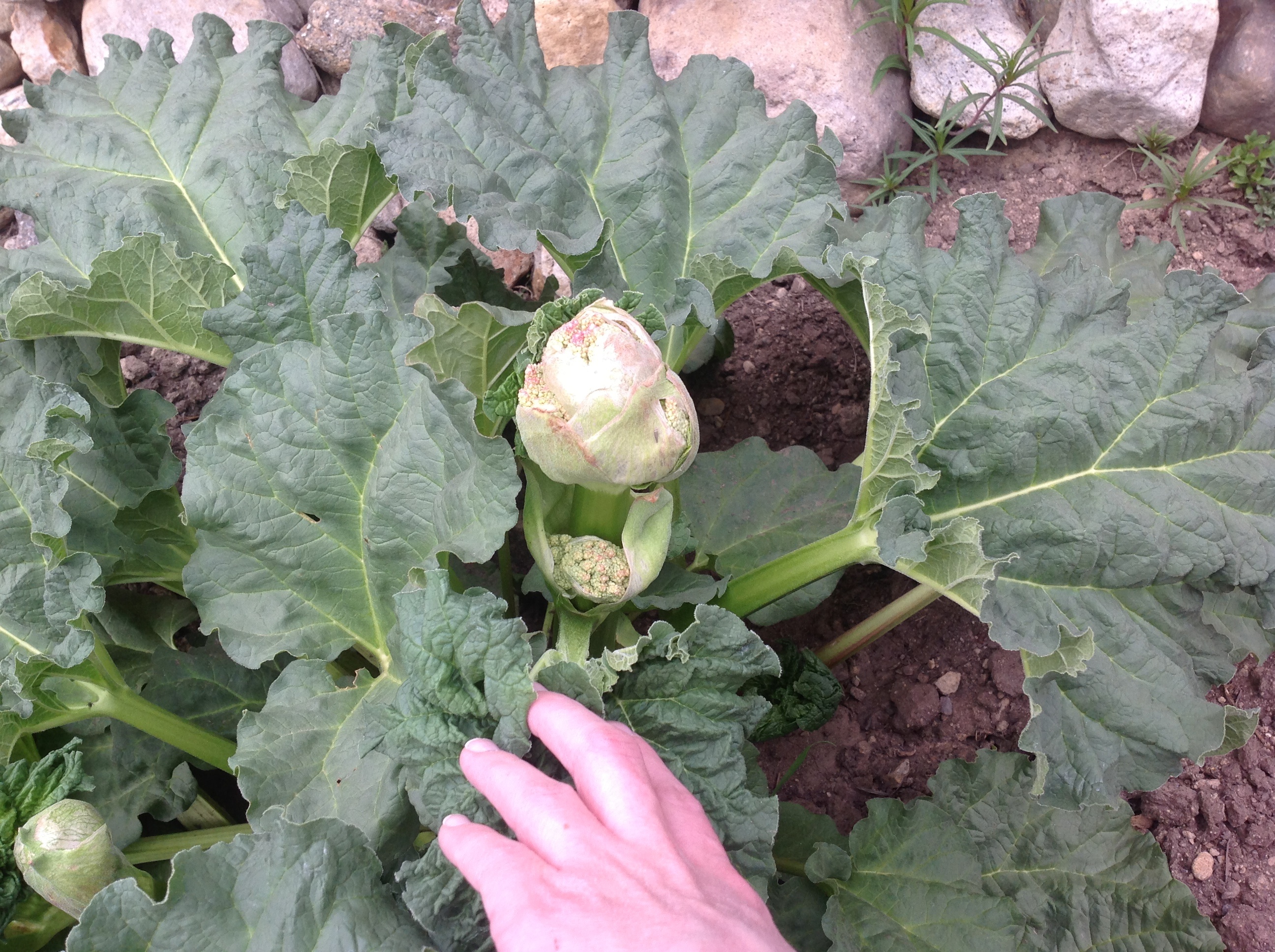 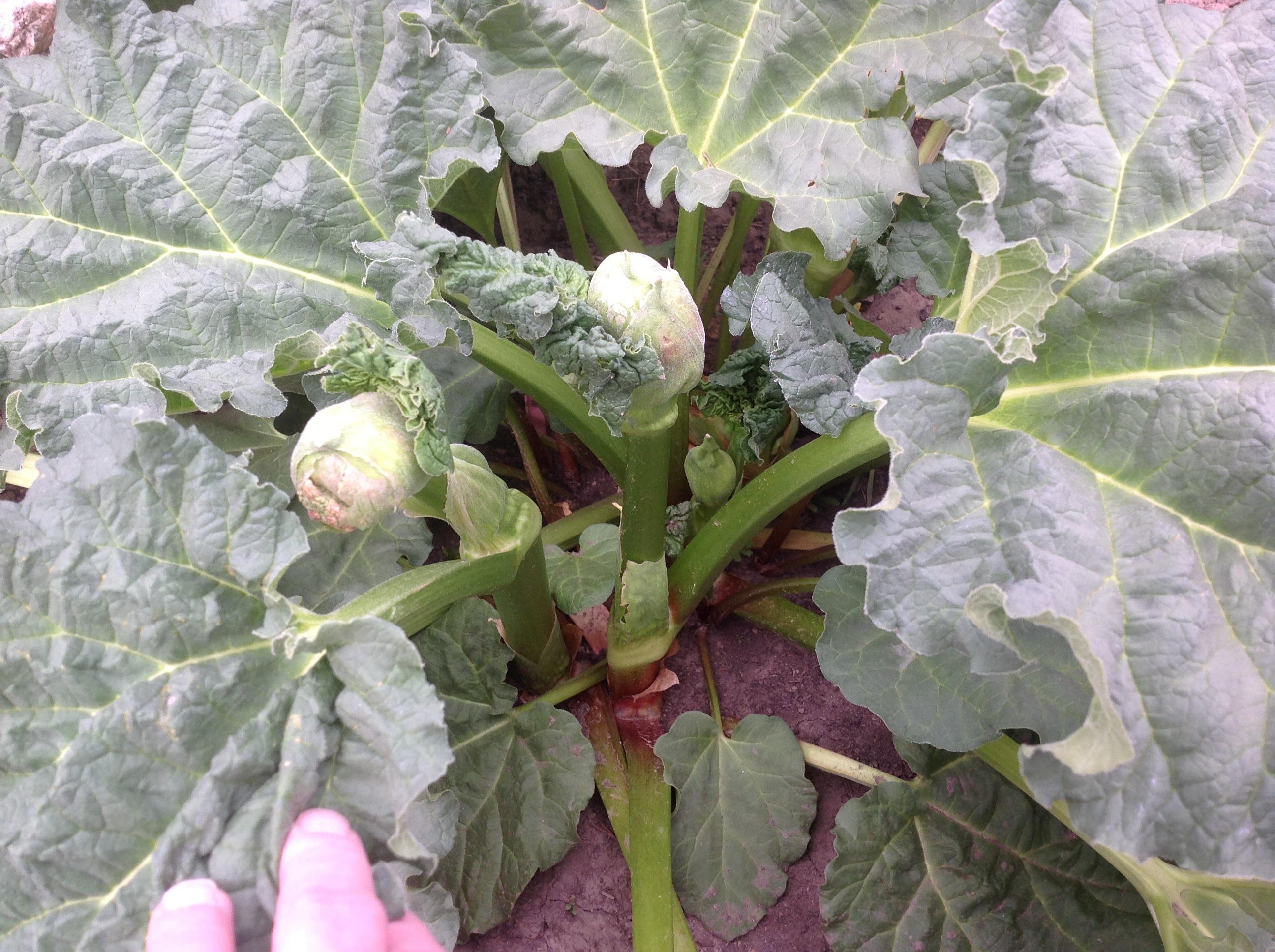 Here is a good article that should answer your question. Again, I would not divide the plant.

We humans can be so difficult to please. If plants flower when we want them to, we call it blooming. But if plants flowers when we don't want them to, we call it bolting. Flowering is an undesirable trait when growing rhubarb; therefore, bolting describes the event.
Gardeners frequently ask why their rhubarb is bolting. Well, if you think of it from the plant's perspective, it is just a part of the plant's natural life cycle. Flowering is part of the reproductive phase that leads to the production of fruit and seed.
But from the gardener's perspective, the production of flowers, fruit and seed wastes the plant's resources, which could be better spent on producing edible stalks or storing carbohydrates to use for the coming season. And if allowed to mature seed, the resulting seedling offspring are often less desirable than the mother plant, which we paid good money to buy as a named cultivar. In fact, seedling offspring are often more likely to bolt than some of the more modern hybrid cultivars and can be vigorous enough or just numerous enough to take over the planting.
It does appear that some rhubarb plants are more prone to flowering than others. Old-fashioned varieties, such as Victoria and MacDonald, are heavy seed stalk producers. Canada Red and Valentine are less likely to bolt. Plant maturity is also a factor, with more mature plants being more likely to bolt than youngsters. Dividing the crowns every 4-5 years should help rejuvenate the planting. Applying moderate amounts of fertilizer, either a balanced fertilizer, such as 12-12-12, or well-composted manure each spring should also discourage bolting.
Weather no doubt has a role to play as well. Rhubarb is a cool season perennial that can remain productive for 8-15 years, if given proper care. Plant stress, such as temperatures above 90 F, prolonged drought during hot weather, poor nutrition, etc., may also promote bolting.
The bottom line is that rhubarb may bolt for a variety -- and likely a combination -- of several factors. Many gardeners may not know what cultivar they have, and there's not much we can do about the weather. So, if your rhubarb should happen to bolt, remove the flowering stalks, just as soon as they are visible, to which the plant will likely respond by sending up another. If you keep at it, soon the plant will return to the desired priority for foliage production.
Another question that sometimes comes up is whether the flowering makes the leaf stalks poisonous. The answer is no, the leaf stalks remain edible, regardless of whether flower stalks are present. However, the leafy blade portion is always poisonous due to a high level of oxalic acid
Debbie Lester Replied June 13, 2013, 10:37 AM EDT